Cordelia Ionello is a Sim created by JennaLorena (talk). She appears in only The Sims 2. She is the daughter of Jonathan and Caridad Ionello, and the younger sibling to sister Elise Whelan and fraternal twin brother Zachary Ionello. She also has two fraternal twin children, Percy and Mariah, with an unknown father.

Since her parents, Jonathan and Caridad, have yet to meet in The Sims 3, she nor her siblings are born yet.

In The Sims, Cordelia and her twin brother have yet to be born, but their birth was definitely not far after the beginning of the game since their slightly older sister, Elise, is already a child.

Cordelia makes her first and only appearance in The Sims 2. She lives in Pleasantview along with the rest of her considerably large family. Cordelia is introduced as Elise and Zachary's younger sister, and the youngest child of Jonathan and Caridad Ionello. She, as opposed to her sister, was closer to her mother than her father. But she is still crushed by her father's recent death. She is very close with her twin brother, so close that he even lives with her. She begins with two children, Percy and Mariah, from an affair with an unknown father. Although struggling as a single mom, Cordelia is very responsible with her job and has a very good relationship with her children.

Cordelia has quite a few friends around the neighborhood, most of them consisting of her aunts, uncles, and cousins (particularly her cousin Carolina). She also has a close friendship with Cassandra Goth with whom she talks about her frequent affairs with fellow single dad, Darren Dreamer. Ironically, Cordelia's crush is crushing on her best friend, causing a love-triangle that has yet to be revealed to either of the women.

Cordelia is just beginning the culinary career, with 2 skills in cooking. Her hair is blonde, although it's understood that it's dyed, since none of her other relatives have blonde hair. Like her cousin Carolina, Cordelia has mysterious grey eyes that can't be traced back to her ancestors. She shares her mother's beauty, and is often considered a local sex symbol. Her exotic beauty and charming personality has been known to turn some heads.

Cordelia and her twin brother, Zachary

Cordelia getting intimate with Darren

Cordelia and her friend Cassandra 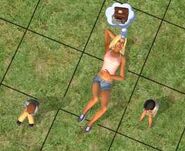 Cordelia relaxing with her children.

The Ionello Family
Add an image to this gallery
Retrieved from "https://sims.fandom.com/wiki/Fanon:Cordelia_Ionello?oldid=692090"
Community content is available under CC-BY-SA unless otherwise noted.