Coquetta Harp (née Moneygrubb), is an original sim (creation of LexxBlix/AedanStarfang) residing in Newcrest in the Sims 4. She is good friends with her husband and son, her parents and her siblings. She is best friends forever with Auburn Lachance, a co-worker and fellow fashion club member.

Life Leading up to the Sims 4Edit

Prior to the start of the Sims 4, Coquetta is a teenager and lives with her father and siblings in the old Moneygrubb Manor at Midtown Meadows. She quickly graduates and enters the style influencer career along with her BFF Auburn Lachance. Coquetta's parents and younger siblings (minus Raziel), move out of Midtown Meadows for a bigger lot to accommodate a budding family, though Coquetta and her brothers Mason Wordsmith and Raziel Moneygrubb.

Seeking aid in the upkeep of the Midtown Moneygrubb Manor, Coquetta and Mason took out and ad in the paper for roommates and eventually several sims; Tungsten Black, Amaranth Lachance, Selene Boolean, Demeterus Sprout and Valentine Nero moved in. Life in the manor went on as usual, only now the family that once inhabited the place was replaced by new friends, who were much like a family. Coquetta got on well with most all of the new housemates, and became good friends with Valentine and Demeterus Sprout. She was mostly only acquainted with Selene, who was a loner and was disinterested in any topic discussing fashion. Coquetta and her housemates won an all-expense paid trip to Sulani for a week, so off they went leaving their Newcrest problems behind. In the meantime the old Moneygrubb Manor at Midtown was secretly burned to the ground, and in its stead were ashes and ruins. Coquetta and her friends were understandably devastated upon their return, which forced the Moneygrubb siblings to move back in with their parents and the remaining housemates to move elsewhere.

Coquetta moved into the newly established Moneygrubb Manor at Rippling Flats, a sizeable lot in the affluent Llama Lagoon neighborhood. Coquetta became friends with Caleb Vatore and Bella Goth while performing free image consultations in Del Sol Valley, where she eventually met Christian Harp and offered him a free makeover, which he happily accepted. The two had dated for a period of two weeks before announcing their engagement and planned a huge wedding event, which all of Coquetta's family attended. The newlyweds moved into their new home "Tranquil Crescent", paid for them by Ansel Moneygrubb. Eventually Coquetta and Christian had their first child; Jasper, and made plans to enroll him into a good private school.

At the start of the Sims 4, Coquetta is living with her husband and son; Jasper, who is now a child at this time, at their Newcrest Home; Tranquil Crescent. Coquetta will be either level 8 or 9 of the style influencer career of the Stylist branch, by now she has become a four star celebrity and is a recognizable stylist.

Prototype Coquetta and Mason chatting outside 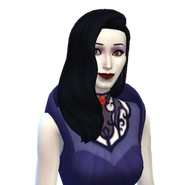 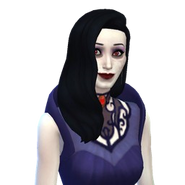 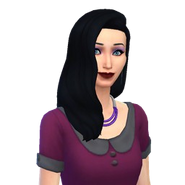 Coquetta's outfits as a teen

Coquetta and Christian Harp's wedding
Add an image to this gallery
Retrieved from "https://sims.fandom.com/wiki/Fanon:Coquetta_Harp?oldid=911366"
Community content is available under CC-BY-SA unless otherwise noted.