Christopher James Redfield (nickname: Chris) is one of the main characters of A Sim's Tale series.

He is the youngest child and the only son of John and Lily Redfield, brother of Leona Delgado and Jean Curtiz, adoptive brother of Charlie Redfield, husband of Tamera Redfield and father of Christine Redfield.

He first introduced as a minor character in A Sim's Tale: Book 1, a tritagonist in Book 2, and the main protagonist Book 3, and a supporting character in Book 4.

Chris was born in Twinbrook March 10th 2010. He was the only son and youngest child of John and Lily Redfield and the younger brother of Leona and Jean Redfield. He moved to Sunset Valley with his family two days after his third birthday.

Notes: Chris didn't had any major parts in the story

Almost nine months after the family moved to Sunset Valley, Chris and his family went to visit his grandfather, Thomas in Twinbrook.

At the end of the camping event, Chris, now 10 years old, discovered a doll and brought it home. In a later day, it was revealed that the doll was in fact, an imaginary friend. Chris was horrified at first, but the doll convinced him to not be scared. Chris then gave the doll a name, Charlie.

Since Chris was the only one who could saw Charlie, every time they talked, everyone around Chris would saw him talk to himself. Chris' mother, Lily was the one who noticed this and became afraid that something went wrong to him. Chris' friend and crush Tamera Gerardo also noticed Chris' "strange behaviour" when they went fishing since Chris brought Charlie with him.

After learning about the possibility to made Charlie via Imaginary Friend metamorphium potion, Chris decided to find the potion's raw material, the Rainbow Gem. Unfortunately, neither his friends nor sisters didn't believed him. However, Tamera, who believed in his story, agreed to help him find the gem. Thanks to a fortuneteller, Chris and Tamera learned that there at least one Gem located in Sunset Valley's old mine. But, they couldn't went there without an adult or older sim to accompany them, until they joined by Alex who voluntered to took care of them.

During their search, the three encountered Big Steve Underwood. Jean and Leona arrived in the mine as well. Big Steve chalenged them to play Poker if they really want to get the gem. Alex accepted the chalenge, and won after tricking Big Steve to gave up, made the homeless man believed that Alex had stonger cards, even though it revealed that Alex had no chance for winning with his cards.

At the end, thanks to Jean's contribution making the potion, Chris finally able to turned Charlie into a real child.

Four years later, Chris, who was 14 years old, finally became a high school student and planned to join the music club since he wanted to join to join the school's band.

As a teen, Chris became more interested in music, especially rock. He often made a cover of many songs and uploaded it on SimTube. His talent made SimNation's legendary rock star, Walter West interested and wanted to met him in person. Of course Chris was also a fan of Walter and really happy when he knew that his idol wanted to met him. Walter offered Chris to participating in an upcoming band competition.

Chris' relationship with Tamera also became more closer, even though their relationship was merely as a friend as Chris hadn't reveal his feeling on her yet for a reason. Chris was felt jealous when a new student, Lance Lewis, a pop teen idol who also had crush on Tamera. Chris then accepted Lance's challenge for a deb to got Tamera as girlfriend. Their rivalry was not only over Tamera, but also involving their talent in music as they both auditioned to join the school's music club.

Due to his rivalry with Lance which involving Tamera, Tamera was upset to him and their relationship became temporarily strained. However, Chris was able to overcame his sadness and focused on the band competition.

During the competition, Chris and The Sunset Riders' performance was spectacular. They tied with Lance's Red Underground. The final result was decided by the audience's vote with The Sunset Riders became the winner. Shortly after the competition, Chris reconciled with Tamera, who unexpectedly, asked him to confessed to her. The two kissed and officially became a couple.

Chris and Tamera would eventually married in middle 2034. In 2036, their first and only child was born. A girl who they named Christine Redfield. Before Christine was born, Chris was very depressed, worrying that he wouldn't be able to became a good father.

However, after talking with John, Chris eventually got a confidence and he was able to became a good father for his daughter as well as a good husband for Tamera.

12 years later in 2048, John was passed away. Despite very saddened, Chris was able to overcame his sadness thanks to the presence of Christine on her side.

Eight years after John Redfield's death. Chris was now 46 years old. Chris was in the middle of tour with his band when his family about to threw a feast party. Fortunately, his tour was ended just in time, so he could gathered with his family.

Chris and the doll

Giving gift for Tamera
Add an image to this gallery 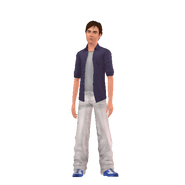 Strumming his guitar at the park.

sharing his room with Charlie

thumb|Chris and Tamera after time skip

Will you marry me?
Add an image to this gallery
Retrieved from "https://sims.fandom.com/wiki/Fanon:Chris_Redfield?oldid=784935"
Community content is available under CC-BY-SA unless otherwise noted.