Fanon article ownership
This fanon page was created and is owned by Schnetzka (talk). Unless the edit is constructive and/or minor (such as fixing a template), please do not edit this page unless given permission from the author.

Charlotte was born into a family that had very little money. Her family could hardly afford to pay for necessary items, but somehow they managed.

Charlotte went through her teenage life which hardly any troubles. By this time her family gained a little more money so they could afford important things.

Charlotte and her friends moved in together. They lived in the same house until Charlotte decided to move out. Charlotte met Gobias Koffi before moving out though.

Charlotte became an elder and decided to retire early. She worked at a grocery store, but she was too busy with her kids, as she had them later in life. Charlotte and Milton were living the life, until Charlotte died of old age. Milton took care of the kids in Charlotte's absence. 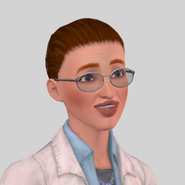 Charlotte with brown hair.
Add an image to this gallery
Retrieved from "https://sims.fandom.com/wiki/Fanon:Charlotte_Tong?oldid=543285"
Community content is available under CC-BY-SA unless otherwise noted.