Charlie Owens is the son of Vanessa and Pollination Tech although he is adopted by Imogen Space even though Vanessa and Imogen are no longer together. He is a baby alien after Vanessa was abducted.

Before he was born, Vanessa, his mother was disowned by her family for being a lesbian. Vanessa moved into a dorm by herself but soon Imogen moved in and they began dating. Vanessa got abducted by aliens later and soon found out that she was carrying an alien baby! Imogen was fine with it though and even agreed to adopt the baby! Charlie was born and everything was great.

As a baby, Charlie had a nice life at first... Imogen was caught cheating with a man (much to Vanessa's shock as she had forgotten Imogen's history with men). Imogen moved away and graduated around the same time as Vanessa. Vanessa and Charlie moved out but Vanessa became depressed, barely giving Charlie and Ok life. Charlie aged up but grew up VERY badly...

As a toddler, life was still awful. Vanessa didn't care for him and only fed him if he cried a lot. He slept on the floor and had no toys. Vanessa taught him nothing and he longed for love.

As a child, Charlie could slightly look after himself now. He loved school as he could escape from his home. He cooked his own food and cooked for Vanessa most nights too. He had good grades but nobody cared. One day, he looked in the fridge and there was literally nothing. He was very hungry and asked Vanessa if she had anything for him to eat. She shouted and called him ungrateful and kicked him out the house. He went to the police station and they arranged for him to go to his other legal guardian, Imogen. Imogen was building a house with her other child Lily whom Charlie got on well with. Imogen may have been a little odd but at least she didn't hurt him. Imogen married a man called Stuart for a short time but later got engaged to Ola who was kind but strict and didn't like Imogen's brother. Charlie was happy until Magdelena was adopted and Magdelena was too cute so Charlie and Lily ganged up against their new sister.

As a teen, Charlie decided he should get on better with Magdelena and convinced Lily to do the same. He found that he had a lot of spare time on his hands so took up sailing. Imogen paid for a trial membership to the local sailing club and Charlie enjoyed it a lot. It was there that he met a girl called Alice and the two hit it off immediately. He was confused about why he hadn't seen her at his school but the reason was that her dad had taken her travelling after her mum died while scuba diving and they had only recently just settled down because her dad had got a job as an oceanologist nearby. Charlie was pleased that she would be staying for a while and they began dating a little while after. They became known on the sailing club as the most well known couple who worked well in life and on the boats. They decided that when they were young adults, they would take a gap year from college to visit Island Paradise to try and see the monster that supposedly lurked there, the Kraken.

During the Summer holidays, Charlie was bored staying with his friends at his parents home so he asked if he could stay in Villa de Sol with his girlfriend and friends as it would be a great place to go in the sea so him and Alice could go sailing. Imogen agreed but only because there would be other people around... no way was she going to let Alice and Charlie there alone, she did have maternal responsibilities after all. The Holiday home was nice although their friends were a little bored especially when Alice and Charlie paid the sea more attention than them. 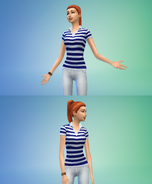 After sailing by the lake

Alone at the Musuem.

A VERY bold pick up line. 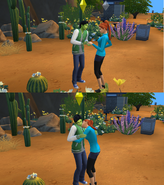 How was your date with Charlie? Alice: We went... Fishing.
Add an image to this gallery
Retrieved from "https://sims.fandom.com/wiki/Fanon:Charlie_Owens?oldid=655019"
Community content is available under CC-BY-SA unless otherwise noted.