Charles was remarkably smart for his age. He always held chess competitions with his aunt Layla and his uncle Harry. He went through a traumatic experience when he found his uncle Jacob's dead body in the pool.

Charles turned out into a rebellious teen. He snuck out after curfew, he bought himself a motorcycle, he always wanted to be with friends, and even more with his girlfriends. He also joined the sports team. Though he isn't very athletic, it might be in his genes, as he has two athletic parents.

He was very popular with girls. He had three romantic interests while he was a teenager. But, in the inside, he was also a very introvert, science freak. He loved to play chess and to make potions. He had a very strong interest for the human body.

He had a very hard time when his father Cemre died at a work accident, due to a large house fire. He always idolized his father, as he was very athletic. When his father died he began to go to the gym even more, to make him proud.

When he grew up into a young adult, he joined the Medical career. He went steady with Danette Saunders, and shortly after, Danette moved in with him. Although he has a relationship with Danette, he often keeps seeing Joelle Hardin. Has he inherited the cheater gene from his grandfather?

Danette and Charles had their first child, called Leonard. As he saw his baby boy, he wasn't sure if he wanted this to be his life. Just a father of a bunch of kids, happily married and a boring job. Charles' rebellious personality was not pleased about his future. He wanted to explore the other options. He kept on dating Lynette and Joelle to see which one was the right partner for him, until he was caught cheating by Danette while kissing with Lynette.

The relationship with Lynette ended when he started flirting with Pat, Layla's imaginary friend brought back to life with an Imiginary Friend Metamorphium Potion. Charles started dating Pat. They got married in the garden and they had a boy called Ethan.

Charles suffered from a mild-life crisis right after Ethan's birth. He started flirting with the maid, not unnoticed by Pat. Luckily, after 5 days of dispute, Pat and Charles reunited.

Charles as a child 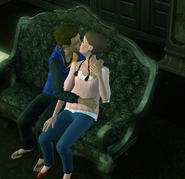 Charles and Joelle making out

Charles on his motorcycle

Charles on a date with Danette

thumb|Charles and Danette making out

Charles giving flowers to Pat
Add an image to this gallery
Retrieved from "https://sims.fandom.com/wiki/Fanon:Charles_Wilde?oldid=657121"
Community content is available under CC-BY-SA unless otherwise noted.