Caryn Rachael Jones is a sim residing in Bluewater Village with her fiancee Sandy.

She is the mother of Christian Jones.

Caryn grew up around the Strangetown area, so the supernatural was nothing new to her. Caryn became outgoing as she grew up, talking to any aliens she encountered.

After high school, she attended College at La Fiesta Tech. She graduated with a degree in economics, and moved to Strangetown. Shortly after moving, she began a relationship with General Buzz Grunt, which quickly fell apart. Caryn then took a job in the intelligence career.

After her relationship with General Buzz fell apart, Caryn started becoming good friends with Claire Howe. She had also recently started a home business. Eventually, she fell in love with Claire, and the two were dating. However, things became weird between them, even just 3 months in. For the sake of their friendship, they broke things off and remained friends. A month later, Caryn shut down her home business, not having the time or resources to run it.

Caryn began to progress in her career, and around this time, met Bella Goth. The two wound up dating. But their relationship was also short-lived due to their conflicting personalities. However, Caryn wanted kids, and wasn't getting any younger. She began to think about settling. Until she met Matthew. After 4 short months, the two were in love. In the heat of the moment, Caryn proposed, and he accepted. The couple was now engaged and living together.

After the engagement, the couple wanted a change of scenery beyond the small, isolated Strangetown. Caryn and Matthew packed up and moved to Belladonna Cove. After their arrival, the two eloped and embarked on their honeymoon in Takemizu Village. After coming back from a fun vacation in the far east, Caryn discovered she was pregnant. Nine months later, Caryn and Matthew were now parents of a beautiful baby girl, named Cristin.

But all was not as it seemed. Caryn and Matthew got two new neighbors, a couple named Mitch and Jeanette Shaw. Jeanette and Matthew became flirty towards each other, and began an affair behind their respective spouses' backs. Mitch soon found out and Jeanette moved out of the building, but continued her relationship with Matthew. But then it didn't take long for Caryn to find out. Furious, she and Matthew separated. However, they made the decision to give their marriage a second chance. For Cristin.

The couple made the decision to pack up and move to Bluewater Village for a fresh start. Things were tight since Matthew had quit his job, although he managed to find work as a lobbyist. Caryn on the other hand wasn't happy with her intelligence work. Once the family got back on its feet, she put in her notice and took a job as a dishwasher. Things weren't so happy at home as Matthew stayed in his political career. He began to feel like he settled, creating distance in the marriage. There was infidelity once again, this time on Caryn's part. She went to the club one night and ended up in the arms of her friend Daisy. The two agreed it should be a one-time thing, although it was only a matter of time before Matthew found out.

The two officially divorced by the time Cristin was nearing high school. While in high school, Cristin came out as trans. Caryn was accepting of her son, who now went by Christian.

Caryn had a short fling with a woman named Heather but it wasn't long before she fell head over heels for her neighbor Sandy Fairchild. Christian was now in college by the time Sandy moved in and the pair got engaged shortly afterward. Caryn also found work as a prep cook. 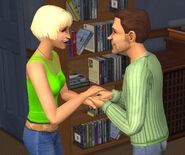 Caryn cuddling her newborn daughter, Cristin.
Add an image to this gallery

Retrieved from "https://sims.fandom.com/wiki/Fanon:Caryn_Jones?oldid=923301"
Community content is available under CC-BY-SA unless otherwise noted.