Fanon article ownership
This fanon page was created and is owned by Potternia (talk). Unless the edit is constructive and/or minor (such as fixing a template), please do not edit this page unless given permission from the author.

Carlotta is a young woman who lived in Starlight Shores. She has mastered her cooking skill, and is an adventurer.

Carlotta was born and raised in the middle of Starlight Shores. She's earned B's through school. She also has a bestie named Naya. They love to spend time together. Naya also liked to hear Carlotta's story about her parents who love travelling. Naya and Carlotta became a really best friends. No wonder, because Carlotta's mother and Naya's mother worked in same career.

One day, she reunited her best friend at reunion party. They missed each other and Carlotta found out that her best friend is dating someone. A week later, her best friend came to Carlotta's house. She look really sad and broken. Carlotta asked, what happened. Naya explained all of her problems and how she was pregnant. Carlotta was a really good friend and calmed her down. She offered Naya to stay with her. Naya accepted and she moved out from her former house.

Naya's baby was born. She was really cute and Carlotta love her so much.Naya decided to name her Nancy. Carlotta and Naya raised the baby together. Naya really thankful to Carlotta because she'd helped her a lot. Nancy, grew up into an adventurous child. Their first adventure began! Carlotta, Naya and Nancy went to Champs Les Sims! Their first adventure began when someone asked Carlotta to search for his stuff that disappeared on at the Forgotten Burial Mound. They succeed to Complete the adventure. And also .. completed the tomb!

In the next day, they raided the Nectary's tomb but couldn't finish it because their time for their flight home arrived. Nancy was really thankful to Carlotta for invited her to Champs Les Sims. Nancy said, that's her first, and marvelous adventure ever.

One day, Carlotta being asked by her best friend. Naya said, that Nancy really wanted to adopt a kitten. Carlotta accepted. When Naya phoned the shelter, just a male kitten that available to adopted. Nancy, agreed. Soon after the arrival of the new family member, Cato, Nancy became really happy when she saw a cute kitten in her house. Carlotta, decided to adopt a kitten too. She phoned the shelter and got one female kitten. Whereas, Carlotta wanted a male kitten. Naya and Nancy offered to 'exchange' their kittens. Nancy really loves Caty. And Carlotta really loves Cato. But, they keep the kittens as their last name. Cato with River as a last name and Caty with Rivera as a last name.

Eventually Carlotta realised that she wanted a child of her own, but, she didn't wanted to get married. She decided to purchase "Clone Voucher" lifetime reward. She redeemed it at Science Laboratory. Finally, she had a daughter! Her daughter was identical to Carlotta. Carlotta hoped, that Carina can get along better with her roommates. She also hoped, that Carina would love adventure, just same as her and Nancy. 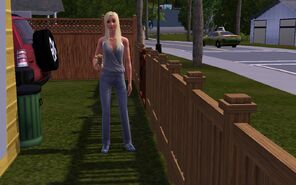 Carlotta stand in front of her house with her kitten, Caty. 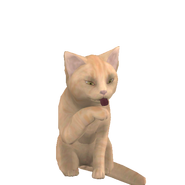 Caty, Carlotta's female kitten.
Add an image to this gallery
Retrieved from "https://sims.fandom.com/wiki/Fanon:Carlotta_Rivera?oldid=685169"
Community content is available under CC-BY-SA unless otherwise noted.