Caridad Ionello (née Rosa) is a Sim created by JennaLorena (talk). She appears in all three of the Sims games, a different life stage in each. She is the daughter of Aaron and Julissa Rosa and the younger sister of Alonda Jones. She is the wife of Jonathan Ionello, the mother of Elise Whelan, Zachary Ionello, and Cordelia Ionello, and the grandmother of Percy Ionello, Mariah Ionello, Jason Whelan, and Elise's unborn child.

In The Sims 3, Caridad begins as a bright-eyed young adult in Bridgeport. She just recently moved out of a house that held her parents, Aaron and Julissa, and her sister, Alonda. She just began her career in the Political career, and has yet to meet her future husband, Jonathan Ionello. She is a popular member of the town, with several friends of all different ages. She is level 1 in cooking skill, and level 3 in charisma skill. Although not specifically stated in her traits, Caridad is quite flirty, often seen with men. She even has an "Exploring Their Options" reputation. She wears a pink tank top and short jean shorts, with black stringed heels. She appears very career oriented, hoping to climb the corporate ladder and find herself at the top.

Caridad has a very good relationship with her family. She is good friends with her parents, and best friends with her sister. She's also good friends with her many aunts and uncles, and her cousin. She's also best friends with Tiara Angelista, who she frequently gossips about the town with. She also is a romantic interest of Tom Wordy, which is strange since she's only one day into young adulthood while he is already an adult, and because he's already a romantic interest of Sugar Bijou, another one of Caridad's friends. She also has an apparent dislike of vampires, shown through her dislike of Sims such as Jessica Talon, Elvira Slayer, and Beau Merrick. This dislike of vampires is likely the reason for her strong involvement in her cousin Welsey's descent into evil. She is the only person in her family other than his parents to not give up on him.

Neither Caridad or her sister are aware of the cheating scandal that haunted both their parents during their childhood.

In The Sims, Caridad, her husband Jonathan Ionello|Jonathan, and her daughter Elise just moved into Neighborhood 1. Not used to being unknown, Caridad struggled to make a name for herself in the neighborhood. She has a very strong relationship with both her husband her daughter. Not long after her moving in did she become very good friends with the Burb family, especially close to the fashion-obsessed Tiffany Burb. She appears to spend more time in Old Town, since she eventually met all of the residents, while she never even met Neighborhood 1 citizens like Michael Bachelor and the entire Pleasant Family. The only negative relationship Caridad has is with Claire Charming, who she frequently gets into arguments with. She wears a blue-flowered dress with a yellow blazer over it.

Her family gained a lot of attention from her neighbors immediately when they bought the "dream house" on 2 Sim Lane. Their riches were flaunted through the town, as they slowly began very popular residents.Also worth noting is that Caridad was already retired once she moved into Neighborhood 1, earning enough money throughout her career to retire before her husband and before elderhood. In conclusion to her bio, she eventually did become the same socialite she was back in the City, seen frequently schmoozing over dinner with her many friends.

In The Sims 2, Caridad is much more of a background character than in either of the two other games. She lives in the town of Pleasantview, in the large mansion on 210 Wright Way. She lives alone, but based on family photo's it's assumed this is the house where she raised her children, and lived with her husband until his death. The widow is close with all of her family members, at least friends with all of her children, in-laws, nieces, nephews, and grandchildren. She's retired, but has more than enough money to support herself. She wears a fashionable suit, with a purple blazer and a matching skirt over a white blouse.

Many new family members of Caridad were introduced during The Sims 2, in comparison to the original The Sims. She and her now-deceased husband Jonathan had two more children after Elise, fraternal twins Zachary and Cordelia, who live together in their adulthood. She also had three grandchildren, one from Elise and her husband, and two fraternal twins from her other daughter, Cordelia, and an unknown father. She also has a fourth one on the way, due to Elise's second pregnancy. A now-deceased sister, Alonda Jones, was added, along with Alonda's husband, daughter, and son-in-law. Caridad also welcomed a brother-in-law, Isaac, who has a wife, a child, and a grandchild, who was taken away by social services.

She is shaken by the recent death of her husband, and is unsure how she's going to go along living alone. She secretly wishes to be taken in by one of her children, but with their lives moving on, the chances get smaller and smaller by the day. She's immensely proud of her children, and frequently spends time with her grandchildren. She is good friends with the fellow elder's in the town, Mortimer Goth, and Herb and Coral Oldie. She also has shown significant interest in Dina Caliente, who bears a few similarities to Caridad as a young adult.

Caridad with her sister and parents.

Caridad and Alonda having a pillow fight!

Caridad and a late-night fling

Caridad with her husband and daughter 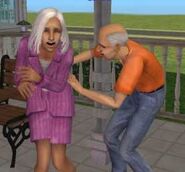 Caridad with her husband before his death.

Caridad with her descendants (Jason Whelan not pictured)
Add an image to this gallery
Retrieved from "https://sims.fandom.com/wiki/Fanon:Caridad_Ionello?oldid=687335"
Community content is available under CC-BY-SA unless otherwise noted.