Buddy Watson was created by Starmoonie. Buddy was born into a litter of puppies who were born hunters, but Buddy refused to hunt...he was just too kind and gentle towards other animals.

Buddy was born into a litter of pups who were trained to hunt for diamonds and small creatures. This however did not appeal to the pup, he refused to hunt for anything but instead was always caught fooling around on the job playing with raccoons and butterflies. His owners grew frustrated with Buddy and gave him up for adoption to their next door neighbors, the Watsons.

He didn't mind living with them at first, his new master Izcrazi lived up to his name. He ate out of his dish more than he did and this made Buddy think that maybe Izcrazi was a dog too. The two played like dogs were supposed to and they didn't even get any discipline by Nova, who was currently locked up in her laboratory for certain reasons, when they broke things. Buddy was soon how ever was trained to protect the house from intruders. He caught several and was rewarded with pounds of meat by Nova. He was very loved and cared for, he never wanted to leave his new family.

When the whole move happened, Buddy was confused why they had to move out their nice little home. But as long as he had Izcrazi and the rest of the gang, he didn't care. 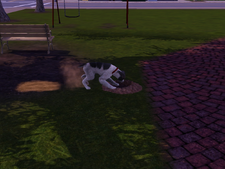 Well gotta dig else where for them bones....
Add an image to this gallery
Retrieved from "https://sims.fandom.com/wiki/Fanon:Buddy_Watson?oldid=625050"
Community content is available under CC-BY-SA unless otherwise noted.