Vargheim timeline
This member of the Vargheim clan is of both timelines.

Bryan Thomas Vargheim is a werewolf child living in Howlgard. He is the second child of Anton IV and Deanna Vargheim. Being the second child, he is currently third-in-line to the patriarchy of the Vargheim clan, after his brother, Ryan and his father.

He has an imaginary friend, Francesca, that he turned real using an Imaginary Friend Metamorphium that he had created. Francesca became his girlfriend soon after the two became teens. 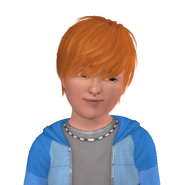 Bryan as a child
Add an image to this gallery
Retrieved from "https://sims.fandom.com/wiki/Fanon:Bryan_Vargheim/Archive?oldid=809602"
Community content is available under CC-BY-SA unless otherwise noted.