The Sims Wiki
Register
Don't have an account?
Sign In
in: Fanon created and owned by C.Syde65, Completed fanon, Sims (fanon),
and 20 more

Bianca Monty is a well known resident in my player stories in The Sims 2 in Veronaville. She is the daughter of Isabella and the late Patrizio Monty, the wife of Kent Capp, the older sister of Antonio and the late Claudio Monty, the mother of Stacey Monty, and the auntie of Beatrice, Benedick, Romeo, Mercutio and Magnus Monty. Bianca is voiced by Zoe Galvez and is 23 days from being an Elder.

Bianca and her friend Kent had been friends since they were children, despite the feud between their families. Kent would often be lectured by his father for going over to Bianca's house, against his wishes. Bianca's father did his best to keep Kent off his property and discourage Bianca from going over to Kent's house. But the two of them always found ways to stay in touch. Several years later Bianca moved out of the Monty compound and into her own house. A welcome wagon - including Curtis Ryan and Victor Lillard - soon arrived to welcome Bianca into the neighbourhood. One of the first Sims Bianca met at a local clothing shop was Albany Capp. I was currently using Albany at the time, so he didn't try and attack Bianca, and thus she didn't realise until later that Albany was a Capp in-law.

Since Bianca moved out of her parents' house her life had so far been pleasant. Now she just needed to find that special Sim, so that she could start a family of her own. Bianca's chance came sooner than expected, when she and Kent continued their friendship which lead to Romance and then Marriage. When Bianca moved in with Kent, she had no idea that he was currently living with his older sister. Regan who had always been sworn enemies with Bianca, began to terrorise her now sister in-law. She only stopped her violent behaviour when Kent firmly stood up to her. Regan's husband Cornwall who had lost interest in the feud ages ago, in favour of earning Simoleons, was not interested in backing Regan up. In spite of everything Bianca and Regan had been through, they eventually became good friends.

Regan and Cornwall gave birth to a daughter - Antonia Capp. Later that same day Bianca and Kent gave birth to their child, another daughter - Stacey Monty. She is a Pleasure Sim who works in the Service career. Bianca got a job at her family's restaurant starting off as a Prep Cook. Bianca loves her job, but she does hope to join her husband with his science experiments someday. Soon Bianca was brought to see her father for the last time as the Grim Reaper arrived to take him away with the Hula Zombies. Isabella, Antonio, Romeo and Mercutio were also there. Though the only Sims mentioned to have received Inheritance were Isabella, Bianca, Romeo, Mercutio and Benedick, many other Sims including Capps and Summerdream would also receive inheritance. Bianca is currently rising through the ranks to becoming a Celebrity Chef and completing her Lifetime Want. 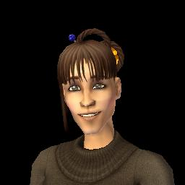