Benvolio Capp is a resident of the Veronaville district in my player stories. He is the son of the still-teenage Juliette Capp and her boyfriend, Romeo Monty. He currently lives with his mother, his great-grandfather Consort, and his aunt Hermia.

Benvolio's early life has been defined by drama. His mother's pregnancy had started a kind of internal feud in the family. Consort was furious at Juliette for her association with the 'enemy', while Tybalt believed that Juliette had been tricked by Romeo, which made him hate the Montys even more.

Because he looks so much like a Monty, it became impossible for Consort to try and pass him off as some kind of previously unknown Capp relative. Since his birth, Benvolio has never met anyone outside his household. Juliette has been forbidden from seeing Romeo since her pregnancy was made known. Romeo doesn't even know that he has a son.

Juliette just after finding out she was pregnant with Benvolio.

Juliette about to give birth to Benvolio.

Benvolio is assisted by his uncle Tybalt to become a toddler. 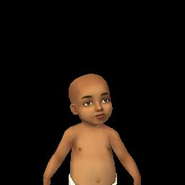 Benvolio as a baby.
Add an image to this gallery
Retrieved from "https://sims.fandom.com/wiki/Fanon:Benvolio_Capp?oldid=827847"
Community content is available under CC-BY-SA unless otherwise noted.