Belle Gothier-Space is the daughter of Debbie Gothier and Barney Space. The sad truth was that her mother wasn't around for most of her childhood as she was died of a mystery illness and her dad later died when he was hit by a satellite.

Before she was born, there was a lot of drama with her parents. Debbie and Barney first dated as Teens but then they broke up due to Debbie's father's wishes. Barney then felt alone and dated two other girls, Natasha and Tina. Meanwhile, Debbie began dating a goth called Eric. After they went to college, Debbie and Eric got engaged however Barney refused to move on. Debbie was then diagnosed with a terminal illness and decided not to marry Eric and went to find Barney but she collapsed and Barney took her to hospital. Debbie and Barney woohooed in hospital but Debbie then left to Three Lakes to get away from it all. However, she found out that she was pregnant but still didn't come back. Finally it was too much to bear and she came back to Barney who was now dating a woman called Marie. Marie soon broke up with Barney as she was uncomfortable around Debbie. This lead to Debbie and Barney getting together and they soon got married.

As a baby, Belle was born into a loving family. Debbie and Barney both had loving family members and Belle was adored. Also the fact she had inherited her Mother's skin tone meant she was more accepted than her other family members had been. Although their home was small they made the most of it.

As a toddler, Belle's mother, Debbie died. This would've been manageable if her father had shown her a little love and helped but he remained sad and moody and followed after Debbie a few months later. Belle then went to live with her recently widowed grandmother. Belle was taught all her toddler skills and a nursery rhyme by her and Belle was the light of Kylie's life.

As a child, Belle at first was happy. She had many friends and had good grades. Her grandmother payed for her to go to a Private school, a luxury she had not given to her children as Fricorith had not wanted them to be seen as a higher status than anybody else, he wanted them to be equal despite their family name. Kylie had always wanted them to but didn't want to have an argument with her husband. Belle was happy until one day in Science, the teacher was talking about pregnancy and said that there was a high chance that the illness could be transferred to the fetus if the mother was ill.

Belle began to realise that maybe she had the same illness that had eventually taken her mother's life. Belle was curious to see but as Kylie was ringing the doctors, Belle told her that she had done a little research and the disease Debbie had could not be transferred via the womb. Kylie was unsure but Debbie insisted and had checked several sites and it was true. In reality, she simply hadn't checked anywhere - she could have it. Kylie seemed satisfied that Belle didn't have it and Belle didn't want to tell her that it wasn't true. Although it would be nice to know she didn't have it, then what if she did? How could she live life without fear everyday? One day a man appeared at the door, Belle at first thought it was Barney resurrected but she was wrong. It was a long lost relative, Ted.

Although he was nice, Belle was disappointed. She stared at him with eyes of steel and he couldn't figure out why. Things got worse when Kylie died. Belle was angry believing it was all Ted's fault. However, the question was about where she would live. The choice was Quinn or Flynn but then Niall suggested he could. He said after Macey left he had no responsibilities and it would be nice for some company. Belle was happy and went off to live with Niall.

Belle was visiting her parent's graves when she saw a man standing by them. He ignored her father but instead was kneeling down, crying at Debbie's grave. Belle came up and tapped him on the shoulder, about to ask him what he was doing, however he turned round and smiled. he hugged as he said 'Debbie, it's you. I don't know how but it is.' Belle pushed him off her and ran away from this scary man who just stared after her.

Niall told her that he was planning a reunion in memory of what Kylie would've wanted. Belle didn't like it though as Ted looked like Barney and it just reminded her that her parents were gone forever. However Niall was sure this was happening and wouldn't let her back out of it. Belle aged up around the time Niall found out he had a daughter called McKayla with Macey.

As a teen, Belle changed. She became moody and aggressive and was diagnosed with Schizophrenia and Niall sent her to an institute to help her. At the institute they tried to get her to release both sides of her with art, dance and drama but Belle just caused havoc. Her drawings were disturbing, usually showing herself in a corner or McKayla hung up by her neck. They could tell she was cross with McKayla for coming and stealing her attention. Niall paid for extensive treatment but Belle rejected it all. Finally after Belle attempted to escape they sent her to the best psychological hospital around in Belladonna Cove. Niall and McKayla came to visit her but after a while she refused all visitors, she felt they had betrayed her. Belle aged up to a young adult but didn't go to college and instead was still in the institute due to her questionable mental health.

As a young adult, Belle was allowed outside for a bit each week with an escort to get her more used to the world outside. Belle refused at first as she liked the safety the institute gave her even thought she hated it at the same time but she finally agreed. Outside she met a lot of people but she found it a bit overwhelming as she hadn't been out for a while. Belle ran away from her escort to find a quieter place and there she bumped into a man called Hunt. He thought she was pretty so he began talking and flirting with her but she felt overwhelmed again so she ran although he scared her she was also intrigued by him so she asked her escort if she could see her 'new friend' again but the escort refused which meant Belle just ran away again to find him. Hunt soon found out she was quiet gullible and didn't know about the world so he used her and eventually seduced her.

Belle was confused and even more so when she found herself pregnant and Hunt was nowhere in sight. Belle became scared as she became worried that pregnancy might trigger the illness Debbie had. She moved into a small flat hardly big enough for her let alone a baby. Niall tried calling her on her mobile but Belle didn't answer for fear that the hospital would track her via her calls. Belle just stayed by herself only going out for food and her work as a waitress in a 50s style diner. She gave birth to her baby with the help of a neighbour but begged them not to tell anybody. Belle didn't even contact the registry office to get her son a birth certificate. She didn't want anybody to know about him.

Belle kept her son at home by herself and taught him everything she knew. She was reasonably good at remembering what she had learned at school so she was confident that she would be able to teach him but her main problem was hiding. She didn't want to go back to the asylum, they had been clamping down on the patients since an escape a few years ago and if she went back she would probably never see her son again. She wished that her parents were still alive and she could go to them but she told herself that she was a grown up now, she could handle this and became dedicated to raising her son. 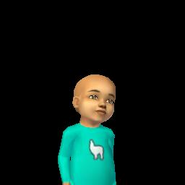 Belle Gothier-Space as a Baby. 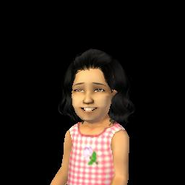 Belle Gothier-Space as a Toddler. 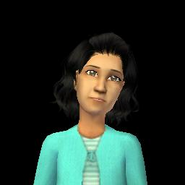 Belle Gothier Space as a Child. 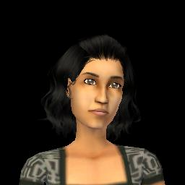 Belle Gothier Space as a Teen.
Add an image to this gallery
Retrieved from "https://sims.fandom.com/wiki/Fanon:Belle_Gothier-Space?oldid=744713"
Community content is available under CC-BY-SA unless otherwise noted.