Bella Goth is a well known resident in my player stories in The Sims 2 in Strangetown.

In my player stories, Bella Goth has been having a hard time being picked on by fellow Townies. She wants to be her own person. She doesn't want the life the aliens set her up to live - impersonating a well known missing Pleasantview resident who just happened to have the same name and a very similar appearance. But even she has a number of friends in Strangetown.

Bella Goth is an official member of the Loner Family in my player stories, while she lives in a separate house. Bella is voiced by Zoe Galvez and is 28 days from being an Elder.

At some point the infamous Pollination Technician, a Sim pollinator and Mad Scientist decided to play a cruel joke on two residents - noting that there were two Sims in the Sim universe under the name Bella Goth. One in Pleasantview and one in Strangetown.

This section was written specifically for my player stories and is not considered to be canonical elsewhere.

Bella is now friends with her former roommates and they are all friends with each other. In my player stories, she was originally employed in the Medical career. Since her employment in the Business career as an Executive, Bella has risen through the ranks and become a Business Tycoon, and thus she completed her Lifetime want. She is also now a neutral Witch. Something the Pleasantview Bella never became. 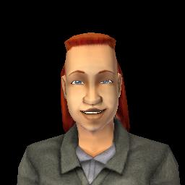 Bella Goth's house.
Add an image to this gallery

Retrieved from "https://sims.fandom.com/wiki/Fanon:Bella_Goth_(Strangetown)_(C.Syde)?oldid=818490"
Community content is available under CC-BY-SA unless otherwise noted.