The Sims Wiki
Register
Don't have an account?
Sign In
Advertisement
in: Fanon created and owned by Carman39, Sims (fanon), Male Sims (fanon),
and 13 more

Fanon article ownership
This fanon page was created and is owned by Carman39 (talk). Unless the edit is constructive and/or minor (such as fixing a template), please do not edit this page unless given permission from the author.

Beau was only a toddler when his father died, and his mother became pregnant soon after. His older brother Dustin began acting out, which made Beau upset. Eventually, Brandi gave birth to Shane, which calmed the household down. Dustin began acting out less, Beau became a child, and the family moved into a bigger home. When Beau became a teenager, Dustin's girlfriend Angela came to live with the family after her own family died. Shortly, Dustin and Angela moved away to college.

While they were away, Beau became an adult. Soon they discovered that Dustin had died at college, after his depression (due to his and Angela's violent breakup) caused him to starve in his dorm room. The family was hit by this blow, especially when it happened on the anniversary of Skip's death. When Angela returned, she had no idea that Dustin had died, having not heard from him since the breakup. Brandi was left to tell her. In order to escape from the drama of Pleasantview, the family and Angela moved to Belladonna Cove. Beau developed a crush on Angela, and soon they began dating. Brandi disapproved of the relationship, finding it too soon after Dustin. But when Angela reveals that the breakup was caused by Dustin beating her up due to a cheating misunderstanding, Brandi allowed the relationship to continue. Beau and Angela moved into an apartment and married. Soon, Angela became pregnant. The couple adopted two dogs, Webster and Pinky. Eventually Angela gave birth to the couple's son Bowie. A while later, Beau went to visit Shane, and discovered Shane holding an alien baby girl. Shane revealed he no longer wanted to care for his daughter, so Beau and Angela took her in and named her Audrey. When Angela and Beau couldn't care for both children, they gave Audrey back to Shane. Shane still didn't want his daughter, so he gave her up for adoption. 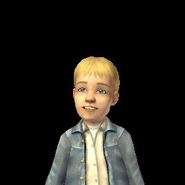 Beau as a toddler.