The Sims Wiki
Register
Don't have an account?
Sign In
Advertisement
in: Fanon created and owned by DarkSuicune2000, Evolving fanon, Sims (fanon),
and 20 more

Fanon of Preexisting Sim
This page is about a preexisting Sim in a fanon setting. This article should not be treated as an canon article. For information about the canon Sim, visit here: Beau Andrews

Beau Andrews is a deleted Sim who is the helper of the villain Corridor in Stuck In Sims 3. Beau, along with his wife, were evicted and deleted from the game so the Hall Family could live there, by Nia.

He was introduced in Chapter 4.

Beau Andrews is a Sim featured in The Sims 3. He lives with his wife Victoria. He shares a good relationship with his wife Victoria despite the two appearing to be complete opposites. He gets along with his neighbors, he is friends with Bessie and Buster Clavell and acquainted with their son Xander. He is also acquatinted with the new guy Christopher Steel and his wife's friends Gus, Bebe and Dorie Hart. He wanted to be an athlete one day, but his dream was ruined due to his sloppy appearance and unfit body, as well as his Couch Potato trait.

After he got kicked out by Nia, he was sent to the Corridor of the Deleted. There, he met Corridor and they both hated Nia for kicking them out, so they're planning on a strategy for revenge. He has also lost more weight, his hair has also grown some more. He is no longer a couch potato or a slob. Instead, his new traits are Evil and Excitable.

Beau and Corridor were getting ready for their 'visit' to Sunset Valley. However, they could not get past the boundary that separates the Recycling Bin from the Sim' world. He later made these jumpsuits for himself and Beau and they will be able to let them pass through the electric field that confines them to the bin.

Beau before the events of "Stuck In Sims 3" 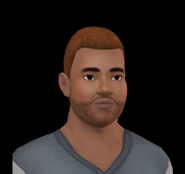