Barney Space was the twin brother of Quinn and the son of Kylie and Fricorith. He had had three girlfriends although he only ever loved Debbie truly. He had one daughter with Debbie called Belle but him and Debbie died soon after Belle was born.

As a baby, Barney had a great life. He was adored by her parents and grandparents, not to mention aunts and uncles. Nobody seemed to notice his unusual skin tone.

As a toddler, Barney drew lots of pictures with his sister. He was taught all his toddler skills and grew close to both his parents and his sister. He especially had fun in the leaves at autumn. When it was his birthday, him and his sister had a great party surrounded by all his family.

Not much happened in his childhood except that he met Debbie, daughter of Frances and Cara. They became best friends although his sister was closer. Also his aunt graduated from college and got married.

As a teenager, Barney felt attracted to Debbie but didn't want to ruin the friendship. But finally he admitted that he liked her and they started dating. They dated for a few months but one day, Debbie told him that they couldn't be together as her overprotective father, Francis didn't approve. Barney tried to complain but Debbie had gone. He was devastated and asked Quinn for help. she set him up with her friend, Tina and they started dating. Tina really liked him but everything she did reminded him of Debbie so they broke up. Quinn was angry that he hurt Tina but tried again to set him up with her friend, Natasha. Although Barney thought Natasha was beautiful there was no chemistry and they broke up. After this, Barney decided he was sick of love and sulked alone.

His grandparents' deaths just added to his bad mood and when Nancy and Allen moved in he refused to come out at all. It was mainly Nancy who had very similar moods. One day, he was woken up by his dad who told him Nancy had ran away... Luckily Nancy came back and soon went to college. That night at Club Lamore, a man came and sat next to him and asked what was wrong. Barney told him he was in love but she didn't love him back. The man said there is a solution, College. A Fresh start. Barney thought it was a great idea and so did Quinn and their friends so they all went to Sim State University.

As a young adult, Barney chose Maths. He was very annoyed that Debbie was at college too. Barney was still annoyed because Debbie was engaged to Eric Harlem. His friends told him to get back out there as there were plenty of single young college girls for Barney to take his pick out of them but Barney was only interested in one college girl, Debbie. Barney was even moody when Quinn had her baby, Lana. He just moped and thought of Debbie. He graduated with the lowest marks to graduate.

As an adult, Barney moved back into his parents home again and did exactly what he'd done in College, moped. One day, he got a call from Quinn telling him not to go out at all. Of course, this made him want to go out now. He was walking past a cafe when he saw the girl he'd been pining after all through college and before that. Debbie...

Debbie smiled and asked him how he was. He said he was fine but it was obvious he wasn't. They went to a cafe to catch up but Debbie said something that made him furious. She was getting married in four days. Barney told her she was rushing into things and she said that she should go. Barney was upset and just went back home and moped. However one the day of the wedding, Quinn rung him up and said there was a problem. Debbie hadn't arrived and asked if Barney could go and find her. Barney agreed. It started raining so Barney bought an umbrella at a shop but as he came out, he saw a foot in a white heel. He went to see who it was. It was Debbie. He leant down next to her and felt her cheek. It was cold. Barney crumpled into a heap, crying. The girl he loved was just dead in a cold alleyway in the rain. A sad way to go.

He took Debbie to hospital and he was sure it was a miracle but Debbie woke up. She saw Barney and immediately said that she couldn't marry Eric and that she was dying and scared and just wanted him to be with her. In the hospital that night, Barney and Debbie woohooed but in the morning, Debbie said it wasn't a good idea. After Debbie was discharged, she went to Three Lakes and nobody saw her for 6 months. Barney also bought an apartment, he didn't want to be a burden to his aging parents. Barney was just starting to do well with his life, he'd began seeing Maria Mazza but then the girl he'd been dreaming about all his lfie was there. Debbie. And she was pregnant. With his child.

He couldn't turn her away, he couldn't let the child be fatherless. So Debbie moved in with him but Maria didn't like it and dumped him. Barney was sad after this but soon things became better. He and Debbie got together and soon engaged. Within a few months of her return, they were married. Debbie soon gave birth to a little girl called Belle. For a while they were happy... Until when Belle was a toddler, Debbie died of her illness and Barney grew depressed. Although he gave Belle all the basics he didn't really care for her like a father. Barney died soon after Debbie in a weird way, he was crushed by a satellite. 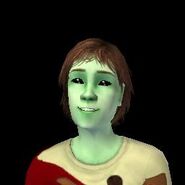 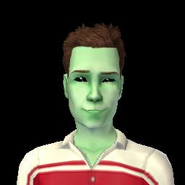 Barney Space as a Young Adult. 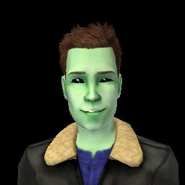 Barney Space as an Adult.
Add an image to this gallery

Retrieved from "https://sims.fandom.com/wiki/Fanon:Barney_Space?oldid=745895"
Community content is available under CC-BY-SA unless otherwise noted.