Baba Yaga was a witch who lived with Arachne Weaver and Gretel Holzfäller.

When Talia White goes to Gretel's household to drop off Hansel, Baba Yaga is the only one home. Baba takes Hansel off Talia's hands and thanks her on Gretel's behalf. Baba later attends Prince Charming's party. Some time later, Baba flies past Talia's house on a broomstick, revealing herself as a witch. Baba eventually befriends neighbor Rose Scarlet, and persuades her to become a witch. As Rose starts down a dark path, she grows closer to Baba Yaga, until the two eventually hook up. Baba later uses Hansel - now a goldfish - in a stew which she feeds to Gretel and Arachne, before she slaughters Gretel and fashions her into sausages. Baba's next move is to attack the theatre, setting it ablaze with her magic and killing multiple people, including Odobenus Rosmarus. She then transfers some of her powers to Rose in aid of her upcoming duel against Glinda, whom Rose fought once and lost. With Baba Yaga's power, Rose defeats Glinda and banishes her from the city. However, Rose is not content with the power she has acquired, and wants more. She visits Baba Yaga, who is home alone at the time, and claims that Baba Yaga's magic is wasted on mindless chaos, stating that with Rose, the limits of magic will be tested and stretched beyond anyone's imagination. Baba has just enough time to be shocked by Rose's betrayal, before Rose incinerates her. 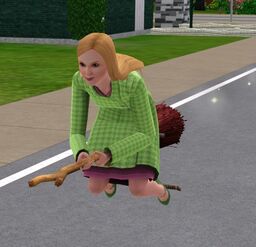 Baba Yaga on her broomstick. 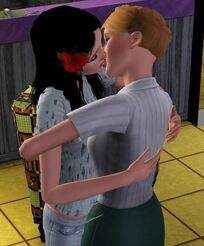 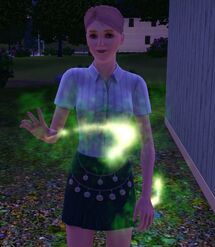 Baba uses magic without a wand. 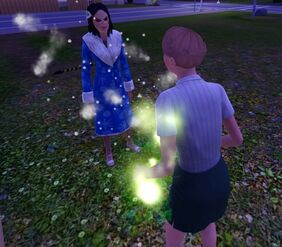 Baba uses ice magic on Snow.
Add an image to this gallery

Retrieved from "https://sims.fandom.com/wiki/Fanon:Baba_Yaga?oldid=783119"
Community content is available under CC-BY-SA unless otherwise noted.