Avery Kruvier is the only son of Nancy Kruvier and Bruce Kruvier. He has high expectations as his parents are high achieving and kind and they hope that he'll be the same.

Before he was born, Nancy was dating a criminal named Seth. She failed to notice that Bruce loved her.She would've stayed with Seth and married him but fate took a different turn. A man cast a spell on Nancy that made her lose her memories permanently. This was bad but good too as Bruce and Nancy got together. Just as things were going well, a man tried to shoot Nancy but Bruce took the bullet. People weren't sure that he'd survive but he did and Nancy became pregnant.

As a baby, Avery had a good life. His parents bought a house in Kierra District as they had family there and it was a good place to live. His parents were saving up to buy a pagoda house that they'd seen in Takemizu Village so that they could have a house just for the unlike the other two. Avery was very well looked after and his parents loved him. Finally his parents saved enough for their house. Avery didn't understand but gurgled at he sight of his parents smiling and laughing happily about something. His parents had always been happy but they seemed happier now.

As a toddler, Avery went out to the house in Takemizu village. He noticed that his mum seemed upset when she put him down but he didn't know why. Over the next few days, Avery had nobody to play with as they were starting to restore the house. He had to stay in a tent which his parents had made in the garden for them to stay in. He hated it. He was glad to get home to his house and all his toys. He grew up into a child, feeling happy.

As a Child, Avery had lots of friends. His best friend was a boy called Parker who his father didn't like much due to him constantly getting Avery into trouble. He had a lot of friends but he usually hung out with 5 people, Parker, James, Tom, Glinda and Mira. Mira obviously had a crush on him but he liked Glinda more but she was a boy called Ron's 'Girlfriend'. It sucked.

As a teen, Avery continued to date Mira but they were growing apart. Avery began having stronger feelings for Glinda although she didn't notice him that way. In an attempt to grow closer to her he befriended Ron and soon Avery would just hang out with Glinda and Ron and occasionally with Parker, James, Tom and Mira. His parents carried on refurbishing the house in Takemizu Village but as they were getting older it became harder so in the holidays Avery would go and help out. At first it was just him but by the end it was him, Glinda, Ron and everybody else. It was nice with all his friends but it was hard to be around Glinda and Ron. Avery wanted to be with Glinda but one night Ron came round to see Avery without telling him. Nancy let him in and Ron overheard Avery moping about Glinda and expressing his hatred of Ron. Avery and Ron got into a fight and Ron told Avery to stay away from him and Glinda. Avery went to college, still depressed about Glinda.

As a young adulthood, Avery moved into a house alone. It was near Glinda and Ron but they didn't know that. he would come and watch them at night and slowly grew more and more desperate for Glinda. Nobody suspected anything as he kept regular contact with his family, kept up his studies and was fine whenever anybody saw him. However he was obsessed with Glinda and nobody knew how bad it was getting. He was by her window ever night, watching her. Avery couldn't bear this, it was mental torture for him so he knew something had to be done. Avery signed up for therapy to try and conquer his love/obsession over Glinda. The therapist told him to try and take up a hobby away from Glinda, date other people and try and distract himself. Try and imagine a future away from her, another love, another wife, a family of his own without Glinda. Avery followed the advice and it worked. He began dating another girl called Daisy Tooley who was the opposite of Glinda. Glinda began appearing less and less in his mind and he was nearly over it when he got a call. Glinda.

She said it was important and she needed him to come and see her immediately. His love for Glinda came flooding back. Although he was dating Daisy then, he broke up with her on impulse and ran to meet Glinda in a place called the Faraway café. Glinda smiled when she saw him and told him that she and Ron were getting married. Being Glinda, she had decided to give all the guests their invites personally so she could catch up on people who she hadn't seen in a while. Clearly Ron had not told her about Avery's love for her. Seeing her made Avery realise that he had to have her, whether she wanted to be with him or not.

Avery decided that he had two choices, kidnap Glinda or somehow make her love him. As the first option probably meant Glinda would get hurt and she DEFINETLY wouldn't love him, he decided to go with the second option. He had heard whispers from the science community of a Potion that could be concocted to force somebody to love you. Avery had nothing to lose so he enrolled in Sim State University and began to study Chemistry but all they did was boring, unimportant things so one day he dared to ask the teacher about a love potion and she just laughed telling him what he wanted was impossible. You couldn't force somebody to love you. Although he hated not being able to get what he wanted, he actually began to become fascinated by the major, discovering he had a natural talent. Avery continued with his major, graduating with honours although he still felt depressed that the whole time he had been doing his major, Glinda was drifting further and further away from him...

After graduating, Avery rented a flat nearby Glinda and Ron's house and he continued, by himself to experiment with potions and concoctions, hoping to finally get what he wanted. Avery hoped that the world would just leave him alone after that but he didn't realize his old chemistry teacher had recommended him to a major science laboratory to help them find a cure to a rare chemical that caused serious illness to Sims. Avery didn't particularly want this but even he knew it would be a great opportunity. He was confused though, because the chemical poison posed no big threat to the Sims, it was hardly present on earth. Why would it need to be addressed with such urgency unless a it posed a big threat? Unless, of course it was...

One night, Avery was staying late at work, partly because he needed to finish a task but also because work kept him distracted from Glinda. As he was walking past one of the rooms he could hear some of his higher ups talking quickly, they sounded panicked. Avery listened in to what they were saying. They were talking about an asteroid, an asteroid that contained substances never seen before by Sim kind. One of them was known and without them even having to say it, he knew that it was the chemical that he was investigating. He rushed off before he could hear anything else. That night, Avery stayed later than usual at work. He investigated the chemical harder than ever before. He studied and analysed it, hoping for a breakthrough. He researched it on every journal and discovered that it only appeared to affect 80% of the population and the symptoms were very clear. The victim would go into a painless, comatose state for a long time and then they would die. There appeared to be no cure nor prevention.

Avery had to find one. 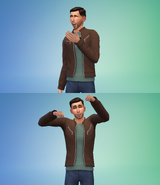 Ron Vaques, Avery's rival and Glinda's ACTUAL boyfriend.
Add an image to this gallery
Retrieved from "https://sims.fandom.com/wiki/Fanon:Avery_Kruvier?oldid=730584"
Community content is available under CC-BY-SA unless otherwise noted.