Astrid Priscilla Toadstool is a main character in Stuck In Sims 3, After Sims 3, Five Years Later, and If Astrid Met Leona. She lives in Montana.

On August 1, 2005 Astrid was born to Jebidah and Felicia Toadstool in Montana. Her mother, Felicia, wanted to raise her to become a proper lady, taking her to girly clothing stores and cotillions. But Astrid likes to play and be messy!

In April 2016, she asked her neighbor Elliot where her newspaper could have gotten stolen... That's when they met. One month later, they crossed paths in the hospital where they had a conversation and became good friends. Then Elliot was called to see his ill mother. In May 2016, her sister Vicky was born and Astrid loved her so much. She always took care of her and played peek-a-boo with Vicky all day. She even bought her sister new toys because all they had were broken hand-me-downs from when Astrid was a toddler.

She often made snarky comments whenever her mother tried to put her long hair in a braid or especially a bun. She preferred her hair down. Eventually, in 2018 she cut it short so she couldn't have in a bun. Two years later, her hair grew to shoulder length again.

When she entered high school, she joined the basketball team and had remarkable ability, noticed by the captain and they became friends.

Astrid is messy, fun, and playful. She loves doing messy things like playing in mud. She is also absent minded and forgets thing often. She loves to try new things, even if it leads to failure. She has a "don't think, just do it" kind of attitude, similar to her father when he was young. Although, she often doesn't get to be herself, especially when her mother is around. 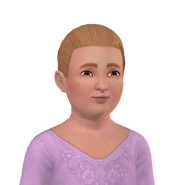 Astrid with her hair in a bun

Astrid and Elliot, her boyfriend.
Add an image to this gallery
Retrieved from "https://sims.fandom.com/wiki/Fanon:Astrid_Toadstool?oldid=765540"
Community content is available under CC-BY-SA unless otherwise noted.