Aricin Otieno Reaper is the oldest child and only son of the Grim Reaper and Arabella Reaper. His family consist of his sister, Avariella, his wife, Sandi, his two daughters, Eloquence, Estelle. His son, Melchior, and grandson, Alexavier. He's completed his lifetime wish of being and International Spy and now wonders what to do with the rest of his life.

As a child, Aricin was raised almost entirely by his mother. But he always wanted to spend more time with his father despite who he was.

One night, a burglar broke into the house. Arabella's ran straight to Aricin's room while Grim and the ghosts scared the robber away. Unfortunately the thief got away with a TV. Aricin began asking his mother about criminals then police officers. That night his decided he wanted to become a spy.

Throughout his childhood, Aricin grew exceptionally close to Sandi French. She came over almost everyday and did homework together. As a teenager Aricin realized his had feelings for Sandi and they began dating. On the night of their gradutaion Aricin proposed to Sandi and she said yes.

Aricin almost immediately applied for a job in law enforcement. Her instantly began earning raises and promotions while he and Sandi worked out the kinks in their future marriage.

One night, his sister was found dead in a nearby lake. Aricin was overcome by grief when he realized how much he wasn't there for his little sister. Sandi and her mother, Molly , moved in to comfort the family. One night, Sandi and Aricin Woohooed and Sandi became pregnant with their first child. Nine months later Sandi had Eloquence Reaper.

When Eloquence was a child, Aricin and Sandi got married.

Shortly after Molly had passed away, Sandi became unexpectantly pregnant again. Though they had not planned on having another kid all the family was elated except Eloquence. Sandi gave birth to a healthy girl named Estelle Reaper.

When the family discovered Eloquence became pregnant as a teenager, Aricin opted with Grim to put up the baby for adoption. They eventually defeated by Arabella's argument. Aricin and Eloquence made up and he made sure she kept her grades up and that her baby's father didn't bother her.

As life went on, Aricin completed his lifewish and continued getting raises. Once again, Sandi became pregnant with their third child. This time they had little room in their house for another child. They set up a small nursery in their own room for the baby. Sandi had a healthy son named, Melchior Reaper.

One day, Aricin and his wife were found dead by their daughter, Estelle. The only witness in their death was Melchior.

Aricin- A Scandinavian name meaning "The King's son" in reference to his father. 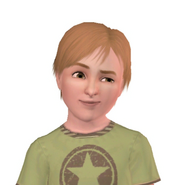 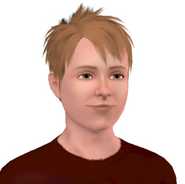 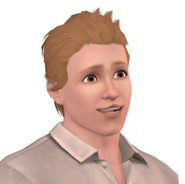 Aricin as a young adult
Add an image to this gallery
Retrieved from "https://sims.fandom.com/wiki/Fanon:Aricin_Reaper?oldid=684614"
Community content is available under CC-BY-SA unless otherwise noted.