Aramaná is the only found descent of the Saint family. She is known to be a chief of her own tribe.

The second chief of a possible lasting 2 generations of female tribal chiefs of the Saint Isles, Aramaná is skilled in battle and fishing. She was sweet and loved making friends even when they raided her village. The girl also loved plants and the fresh smell of the ocean, her tribe believed she was also connected with their spiritual god of the ocean.

Aramaná's mother was chief before her so it was bound to happen she was going to be the next in line since she had no other siblings. Her tactic skills in war with their enemies she was soon looked upon by one of her enemies as a goddess of war. Battles didn't last long with her around, this also concerned her fellow allies to think she may turn on them. When a new force came out of the blue Aramaná was questioned if she can keep up using some of the same moves in battle. But when this new guy took it upon himself to assassinate her when her back was turned.

Villagers buried her on the roof top mountains of the island and to this day since the island sank, rumors fly that she haunts the new recreated island. 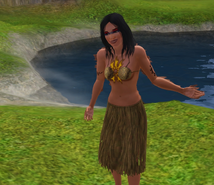 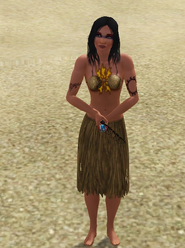 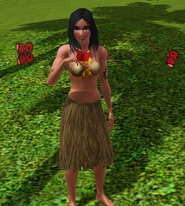 Retrieved from "https://sims.fandom.com/wiki/Fanon:Aramaná_Saint?oldid=402440"
Community content is available under CC-BY-SA unless otherwise noted.