Arachne Cucullatus (née Weaver), codenamed "The Huntsman", is a vampire, as well as procurer of dark magical artifacts which she trades for a price. She currently lives with her husband Raphus Cucullatus and their army of vampires.

Arachne lives with Gretel Holzfaller and Baba Yaga, and uses Baba Yaga's skills as a witch to acquire precious magical items. Eventually, Gerda comes to Arachne looking for something that will cause Kay White and Rachel Muffet. Utilising Baba Yaga's close relationship with Kay's stepdaughter Rose, Arachne has an elixir smuggled into Kay's beverage one day, which magically causes Kay to become angry, to the point where he breaks up with Rachel and scares her off, allowing Gerda to enter the picture and seduce Kay. Arachne's source of magical materials is cut off, however, when Baba Yaga is killed by Rose, who absorbs Baba's powers as a witch. With Gerda also dead, Arachne finds herself living alone.

Becoming acquainted with vampire millionaire Raphus Cucullatus, Arachne eventually asks him to turn her. Raphus obliges and transforms Arachne into a vampire. Some time later, Marigold Loxlie breaks into Arachne's house in an attempt to rob it, only for Arachne to capture her and turn Marigold into a vampire as well. When Gerda asks for Arachne's help in killing Snow White, Arachne gives her a poisoned apple. As Arachne builds up her vampire horde, she and Raphus get married. Arachne and her undead legion move into the Cucullatus household. 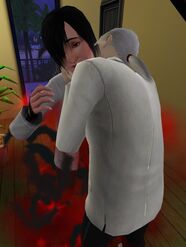 Arachne is turned into a vampire.
Add an image to this gallery

Retrieved from "https://sims.fandom.com/wiki/Fanon:Arachne_Cucullatus?oldid=784068"
Community content is available under CC-BY-SA unless otherwise noted.