Arabella Reaper (née Skelton) is the deceased wife of Grim Reaper. She is also the mother of Aricin and Avariella Reaper and grandmother of Eloquence, Estelle and Melchior Reaper. She also her a great grandson named Alexavier. She has completed her lifetime wish of being and professtional author and now haunts the family estate with the other five ghosts.

Arabella was born to Jera Skelton who had left Arabella's father before she was born. Arabella lived with her mother and new husband, Steward Curious, in Twinbrook for the first couple years of her life. Arabella didn't spend time with her parents much when she was younger, as both openly disliked children. She was often taken care of by a babysitter or a friendly neighbor.

When money became tight and showed no signs of getting better, Jera snatched up most of her husband's fortune and Arabella and ran off to the next town. About a week later, Steward died when a meteor crashed into his house.

Over the rest of Arabella's childhood and teenage years, she was dragged along by her mother as they skipped to town after town, swindling rich men and taking their money just before things got to bad and often leaving the men dead or homeless. Arabella was always appalled by her mother's lifestyle and wished for her own freedom.

Jera finally settled down with her daughter and her final husband in Hidden Springs though Arabella did not stay for long and the moment she had the chance she left her mother and applied to university to become an author. Arabella cut off all communications with her mother.

When Arabella graduated, she tracked down her father to Sunset Valley only to find his grave. During her time in town, Arabella heard rumors of a haunted house and, with her obsessional interest in the paranormal, she bought up the house.

Now the owner of the most haunted house in town, Arabella took up the challenge of exploring it. While exploring the attic she found three ghost and none other than the Grim Reaper himself. He questioned why she was trespassing in his house and threatened to kill her. One of the ghosts, Thelma McCracken, interrupted him and convinced him she wouldn't tell anyone if Arabella stayed in the house and they kept an eye on her. Arabella agreed and made it her job to keep the house clean, cook for everyone (including the ghosts) and pursue her dream of being an author. As the days when by Grim began to warm up to Arabella and began to fall in love with her. When he confessed his love Arabella too realized she had feelings for him. It wasn't long before they were dating. One night they ended up Woohooing and the next day Arabella discovered she was pregnant with Grim's child. Grim Reaper was not as pleased with this as Arabella was. He worried the child would be immortal like him or tell everyone who about his existence. Arabella asured him of his worries and soon gave birth to a healthy boy. She named him Aricin Reaper. Arabella spent every free moment she had on Aricin wheather it was teaching him to walk and talk or playing games with him. When Aricin grew up into child Grim Reaper proposed to Arabella. Arabella said yes and the two were engaged. Aricin was a very sociable and successful child. He befriend his neighbor, Sandi French, and the two became inseparable.

Grim and Arabella decided it was best for their family if they got married and did so in the privacy of their own home.

One night, A burglar broke into the Reaper home. Grim and the ghosts scared the robber away but not before she got away with a TV. Aricin had been awoken but the noise and Arabella did her best to calm him. He began asking her questions about crimnals. That night he decided he wanted to be a super spy. A few days later Arabella discovered she was pregnant with Grim's second child which they were as equally excited (and worried) about. Nine months later she had her first daughter, Avariella Reaper. Arabella did everything for her daughter but all Avariella wanted was to be as far away from the ghosts had her father as possilbe.

Arabella was constantly worried about Avariella's mental state and her continuing disappearances. As a child things didn't get any better for her. On the night Aricin and Sandi graduated, Aricin proposed to Sandi and she said yes. Arabella and Grim were elated and began making preparations for Sandi, and her mother to move in and making room for any new grandchildren.

A few days later, Avariella disappeared and unlike the other times, she didn't come home after dark. Arabella knew something was wrong because Avariella was afraid of the dark and always came home. She filed a missing person's report and the next morning Avariella's body was found in a lake where she had drowned herself. Arabella, being closest to Avariella, was the most distraught by death. After this Sandi and Molly quickly moved in with the family to comfort them.

Arabella found a new purpose in her life when Sandi revealed she was pregnant with Aricin's child. Arabella took every second of her day writing best sellers and making sure Sandi was comfortable. Soon Sandi had a healthy baby girl whom they named Eloquence Reaper. Arabella took care of Eloquence while her parents were working though the two were not friends since they never really saw eye to eye. When Eloquence became a child, her parents got married.

Not long after, Arabella completed her lifetime wish and officially bacame a professtional author.

Eventually Sandi had her and Aricin's second daughter, Estelle Reaper, and she took care of her as well. Unlike Eloquence, Arabella and Estelle became extremely close.

Around the age of 16, Eloquence discovered she was pregnant with her boyfriend's child. This caused tension in the family. Arabella sided with Sandi and even little Estelle (whom was a child at the time) to keep the baby while Aricin and Grim and even the baby's father, Darrell Hauser, wanted to get rid of it. Eventually, Arabella's argument won and Eloquence had a little boy, Alexavier Reaper. Without the father's support and her parents working, Eloquence left her son in Arabella's hands while she went to school.

By now, Alexavier is a child and Eloquence is a young adult and take care of her son on her own. Arabella managed to reach passed the maximum age of a normal Sim and was 129 years (days) old at the time of her death. She has a large gravestone in the family graveyard that is covered in rose moss.

Arabella's ghost haunts the Reaper house at night. She still enjoys talking to her family and occasionally herself.

Skelton- Named after Meg Skelton, a witch in Joseph Delaney's series The Last Apprentice. Also similar to the word skeleton as in a bony corpse. 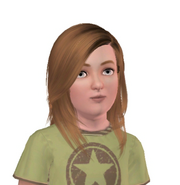 Arabella as a child 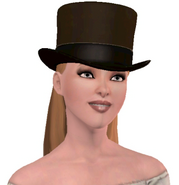 Arabella as a Young Adult 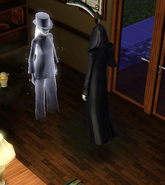 Arabella and her husband 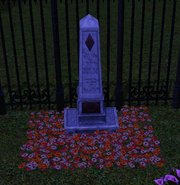 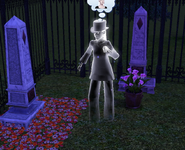 Arabella talking to herself
Add an image to this gallery
Retrieved from "https://sims.fandom.com/wiki/Fanon:Arabella_Reaper?oldid=624874"
Community content is available under CC-BY-SA unless otherwise noted.