Antonio Monty is a well known resident in my player stories in The Sims 2 in Veronaville. He is the son of Isabella and the late Patrizio Monty, the widower of the late Hero Monty, the ex-boyfriend of Titania Summerdream and Arianna Jalowitz, the husband of Goneril Capp, the younger brother of Bianca Monty, the elder twin brother of the late Claudio Monty, the father of Beatrice, Benedick and Magnus Monty, and the adoptive father of Hal Capulet, Desdemona, Miranda and Ariel Capp. Antonio is voiced by David Boat.

Antonio is considerably younger than his pre-made counterpart. He started off with 18 days before being an Elder. In my player stories Antonio is 25 days from being an Elder. So he is now the younger brother of Bianca. The reason why I decided to change the birth order of him and his siblings is because Patrizio's Memories state that Bianca was the oldest child, then Antonio, and Claudio the youngest. This is also the order they were born in Monte Vista for The Sims 3. In my player stories Antonio is 2 days younger than Bianca and 2 days older than Claudio. Despite this, my player story still suggests that Antonio and Claudio are twins.

After Hero died, Antonio fell in love with Titania Summerdream, despite her Marriage to Oberon. Oberon was angry when he caught Titania Cheating with Antonio. Nonetheless their relationships were not strained for very long. After he and Titania fell out of Love, Antonio began a Relationship with his Maid Arianna Jalowitz. She turned down his proposals for engagement and they fell out of love not long after that. But the two of them were still good friends.

At the start of the game Antonio is feuding with five members of the Capp family - Consort, Goneril, Regan, Kent and Tybalt. In spite of this, my player stories imply that Antonio was never very keen on the family feud and that he was pressured into becoming a part of it. When Albany Capp had gone over to his house uninvited and shoved him, Antonio was given the chance to try and end the feud. Albany's physical abuse had inspired Antonio to continually ring him up until Albany had - before he realised it - been befriended by a Monty. Before Albany's hatred for Antonio had properly dissolved, he rushed over to Antonio's house, rang the doorbell and then rushed off. After Albany's feelings towards the Montys had changed, he and Antonio tried to persuade their respective relatives to call off the feud.

It took a few months for most of the Monty's bitter feelings for the Capps to dissolve. However it took approximately one year before most of the Capps were willing to accept the Montys, as they weren't as flexible as the Montys were. But as the feud was coming to an end, Albany's ex-wife Goneril Capp developed a crush on Antonio. When Antonio realised that Goneril now fancied him, he just couldn't resist the temptation to return her romantic feelings. They fell in love, and in seven months time they got married. Desdemona, Miranda and Ariel were adopted by Antonio, and Beatrice and Benedick were adopted by Goneril. As a follow up of their successful Marriage, Antonio and Goneril decided to have a child together - Magnus Monty.

Despite having Patrizio back as a best friend, Consort was still shocked and angry when he heard about Antonio and Goneril's marriage. He intimidated Antonio and tried to force him into breaking up with Goneril. This resulted in Consort getting beaten up by his daughter Goneril, who was offended, while Patrizio watched in alarm. Consort and Goneril would not speak for months. Soon after that Antonio was brought to see his father for the last time as the Grim Reaper arrived to take him away with the Hula Zombies. Isabella, Bianca, Romeo and Mercutio were also there. Though the only Sims mentioned to have received Inheritance were Isabella, Bianca, Romeo, Mercutio and Benedick, many other Sims including Capps and Summerdreams would also receive inheritance. Eventually Antonio's job performance paid off and he was promoted to Celebrity Chef, and thus completed his Lifetime Want. 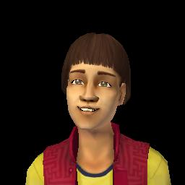 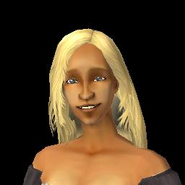 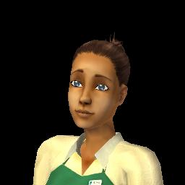 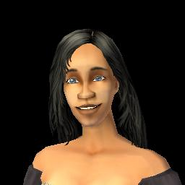 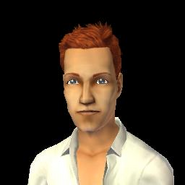 Antonio's former Maid Steven.
Add an image to this gallery

Retrieved from "https://sims.fandom.com/wiki/Fanon:Antonio_Monty_(C.Syde)?oldid=818359"
Community content is available under CC-BY-SA unless otherwise noted.