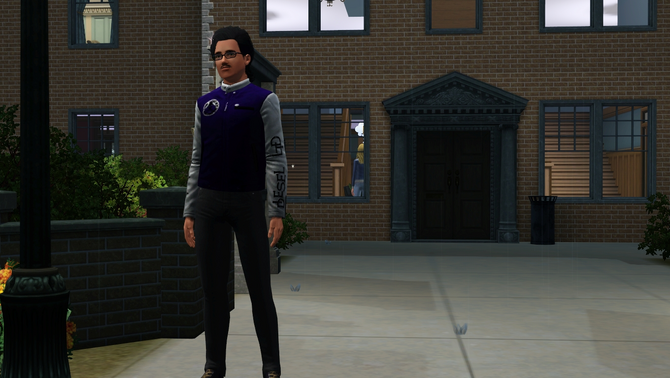 Anthony was the "King of Bohemia" during his college days since he is leading his colleagues in both the unconventional Nerd and Rebel groups to succeed against the bullying Jocks. Now that everything is cool between the groups, he focuses on his real goal in life instead: being a Jack of all Trades.

Fanon article ownership
This fanon page was created and is owned by Gourd Roger (talk). Unless the edit is constructive and/or minor (such as fixing a template), please do not edit this page unless given permission from the author.

Anthony Nagel (born Nägel  /næɡᵊl/ on June 9, 1985), is a Filipino-born Sim recording artist and architect. He is most notable for being one of the four members of the band Chants n' S*aggin' Pants under the stage name of Kennett Church.

He first appeared in the Facebook game The Sims Social. Afterwards, he appears as a minor character for The Sims: Vacation and The Sims 2, making him the Author Avatar of the user Gourd Roger. He then appears as a standalone character in The Sims 3 and The Sims 4, with two separate incarnations for each game. His name is meant to be a pun on the real name of the author as he sarcastically represents Simmers who tend to try to look like themselves.

For his Sims 3 incarnation, he first lived in Appaloosa Plains as the only son of Swiss architect Josef Nagel and Filipina-Spanish painter Sonia Valdivia. He is currently dating his long time friend and fellow band member Sapphira Julienne which he met during a Rebel meet in The Grotto. He currently lives in a three-storey house in Isla Paradiso named Frittenhaus (literally "Fries House", formerly named Fallingwater Three until he changed the house design) which he designed along with his smaller previous house in Sunset Valley named Fallingwater Two.

Aside from working as a recording artist and an architect, he also served as a military officer and a junior business executive.

Anthony's personality was designed to be as human-like as possible, having pairs of traits that seem to conflict each other but in the end creates a more complementing personality aspects that somehow makes it more colorful.

Anthony's two easily noticeable traits are Adventurous and Clumsy. They somehow conflict with each other at first impression although he realized he can actually use this two traits to his advantage since he can act dumb to provide. This also mixes well with his Genius trait as these two traits make him a curious Sim. These two traits also go with his Loner trait, as real-life introverts would generally go clumsy in social settings although their act of being reclused is not an excuse to become explorers of various aspects of life.

Another possible combination of two traits is him being a technophile, or anybody who loves technology to an extent that he's fanatical of it. This comes from his Computer Whiz and Genius traits going well together. It is also a result of the aforementioned Curious trait above. When he was visited by a time traveler from Oasis Landing, he was shocked by the amount of technology and knowledge the future has offered him. He also saw the progress of his lifetime of hardwork, as his descendants live as a major family in Oasis Landing.

He also represents his secondary social group well. Despite not being an Avant-Garde or a Rebellious Sim, he can cope up with the Rebels with slight distinction due to a combination of his Adventurous and Loner trait and his love of Street Art. This makes him quite the silent rebel type that does not recognize some of the rules. This was first shown when he vandalized B's Bowlarama.

Due to being a socially awkward person from the combination of Clumsy and Loner trait, he finds socialization the second most difficult thing in his life next to living itself. He managed to overcome this difficulty and became one of the central charismatic figures in Sims University, effectively bringing the Nerds and the Rebels together against the Jocks who seem to be threats to their peaceful living. He also formed a band along with a bunch of these Nerds and Rebels and made them eventually reached level 1 celebrity status. This event stopped him from being the stereotype of being shy from the Loner trait.

He seems to be also kind of successful when it comes to dating. He managed to have a sizeable amount of admirers on his online dating profile and mostly coming from other majors. He then decided to ditch every single one of them when he met Sapphira during a Rebel meet.

Anthony's physical traits balances between the Asian traits of his mother and the European traits of his father. While he seems to acquire most of his facial features from his mother, he acquired his father's skin and nose. This is untrue for his character's traits from The Sims 4 where he also appears as a separate lead role and in which he slightly looks more Filipino than he looks like in this game where he looks more like a stereotypical Asian teenager. He has brown eyes and black hair, with light skin that makes him look a little more Chinese.

He wears varying sorts of eyeglasses for his Outerwear, Everyday and Formal outfits. He has a second set of outfits for these three that are specifically made for the future. When he first visited Oasis Landing, he found his outfit and technology kind of awkward for this futuristic age. This is why he prepared himself for the next time he visits there so he can blend well with his descendants. These changes range from the outfits he uses to the furniture he has inside his house.

Just like in the other games, he wore different kinds of clothes. However, comparing his present incarnations in The Sims 3 and The Sims 4, he never wore sleeveless shirts outside the house. This time his clothes are also more diverse since he keeps on changing his clothes every 2 Sim days. No one recognizes that he uses the same type of clothes but with different designs thanks to maximizing the capabilities of the Create a Style feature, lessening the effort required to change a certain type of clothes.

Sometime during and after his second term in college, Anthony grew his hair as well as a small mustache. He also developed hair in his limbs as a result of late puberty development. This gave him a slightly more European look than his earlier appearance in the game. He still wore the large aviator-like glasses unless he is sleeping, exercising or swimming.

Story as a The Sims Social character[edit | edit source]

Back in 2011, Anthony was one of the two Sims Gourd Roger created for The Sims Social, the other being Renzi Stevens. Both were created using two separate Facebook profiles and they never met each other until The Sims 4. Like most players of the game, he settled in the suburban district Littlehaven first. Nothing significant happened after that, aside from owning a house worth 100,000 Simoleons.

Throughout the three different incarnations of Anthony in The Sims 3, Anthony has a well-lived life. He also said that he never regretted any of his actions during his lifetime, even with the privacy issues brought by being a celebrity.

Anthony was born in an island that looks similar to Sunlit Tides while he lived much of his days as a Toddler and Child in real-life Germany. His family then decided to move to Appaloosa Plains late in his childhood. They settled in the Trotter Cottage house. He studied in Crestview School and Stadium during his Elementary and High School years. He graduated with honors, finishing with an "A" grade. Nothing else significant happened during this life stage.

According to the Sims surrounding their family, Anthony is regarded as a kind Sim despite not having the Good trait. There might be some conflicts between him and his parents regarding school work and responsibilities, but he was still relatively close to them. He is also seen as shy as he is today, since he almost never gets out of the house out of personal choice. This did not help him to get rid of enemies though.

After graduating from high school, a sixteen-year-old Anthony agreed to move out of his household and settled in Sunset Valley which became his home for several years. He started this lot with a small one-bedroom house until his second year in college. He then redesigned this house into a three-storey one that has a waterfall design and eventually named it "Fallingwater Two", inspired by the famous Frank Lloyd Wright house.

Just after his 18th birthday and became a Young Adult, Anthony was visited by a university mascot. He took the admissions test and manage to pass it for all degrees. He entered the Technology degree and first settled in Malan Hall. He was dissatisfied with the area's lack of parking space although he is impressed by the backyard. However, it seems that this area is hostile for Street Art work. During the first semester, he managed to finish as a Dean's Lister. This is out of his lifetime wish to become a Perfect Student, to finish university with a perfect GPA.

He was also introduced to the three social groups, affiliating first with the Nerds. He made friends with Tiffany Angles, whom later became his girlfriend. However, their relationship has been always on the rocks due to her Unflirty trait. He also made friends with Nathan Gorski, whom became his source of science equipment. He also affiliated himself with the Rebels on the second semester and became recognized because of his famed Street Art works. After affiliating with the Rebels, he became friends with Asala Karam. Asala has been reported to be in a beef with the Sorority household of Ye Gangnam. The spillover of the initial drama spread to the friends of both sides until it became a two-sided conflict, until it became a full scale war between the Jocks and the Rebels.

On his second year, he still did not recover from the happiness that he entered again the Dean's List. He remained doing constant effort that brought him there. He also developed the love of having a pet so that he'll socialize without having to experience the same judgment with people because of his Loner trait.

One time after doing several graffiti tags on B's Bowlarama, he spotted a girl sitting on a couch in The Grotto, seemingly overwhelmed of the party culture she never used to. Anthony never talked to the girl, respecting the girl's need for silence and alone time. The girl approached him and asked, "You must be a freshman here". Anthony replied that he isn't a freshman and the girl was shocked in response. The girl introduced herself, telling that she is a freshman. He replied by her looking more of a high school trespasser. They became friends after talking about various subjects, and not realizing that both live in the same dorm.

Sapphira is what Anthony claims as his first true love, and liking her for various reasons such as being a cat lover as well as being a philosophical and interesting girl to him. Anthony then directly introduced Sapphira to the college culture, having three different social groups. Sapphira decided to join the Rebels despite being bored at the meet she came to. Having similar issues with Ye Gangnam, Sapphira joined with Anthony's Street Art work to vandalize their house. Anthony saw Sapphira's studying dilemma. He helped her in making paintings as well as in researching and doing study work. Despite failing the first week exams, Sapphira managed to also become a Dean's Lister with him in the finals.

Retrieved from "https://sims.fandom.com/wiki/Fanon:Anthony_Nagel/TS3?oldid=815540"
Community content is available under CC-BY-SA unless otherwise noted.