Fanon article ownership
This fanon page was created and is owned by Viviminako (talk). Unless the edit is constructive and/or minor (such as fixing a template), please do not edit this page unless given permission from the author.

Anthony Alford is the managing household of Alford Family, along with his wife Clover Alford. They build the household together, believes that would be one of their successful families. Anthony is the main Sims of the Alfords, hence his childhood and teen years is not stated on his biography.

Young adult Anthony moved into Sunset Valley with his wife Clover Alford, along with their two children, Francis Alford and Felix Alford. Start from the 1st day moving in Sunset Valley, with the braveness if his traits and strong individual to saves everyone’s life; Anthony joined the Firefighter career.

Anthony reached his peak of his career on his adult stage. He continues to saves everyone’s life even he has reached his rank as Fire Chief. He had becomes a neighborhood hero and celebrate his succeed at City Hall often. With the blessing gift, he had gifted a healthy male child. Howard Alford was born before the next celebration of Anthony’s succeed to obtained the Golden Fire Hydrant. Anthony fulfilled his lifetime wish in the middle end of his adulthood. He promised the neighbors that he will continue the services to serves everyone in need and saving more life before he turned into his elder stage.

Anthony’s family is almost completed. He able to see Felix’s married at the very end of his adult stage. And there goes, his son-in law Miraj Alvi has joined the household. After a week and few days, Anthony had becomes a best friend with Miraj. Whenever Anthony wishes to find someone to talk to, he goes to Miraj more often.

The final stage of Anthony’s life circle has reached upon him. Anthony is retired from his Fire Chief ranking. He wants to spend his remaining time with his family. Once he ends his phone call about the retirement, his families cheer for him.

Feeling grateful, he able to see his new grandchildren was born before he expired. His family is completed with his grandson Terence Alvi and his granddaughter Catalina Alvi along. Even he had no more tied with his busy career, he able to take care of his grandchildren and enjoy his life until the very end.

The hourglass of Anthony’s life has stopped eventually. He feeling thankful, because he able to see his healthy grandchildren to grow up and become a young adult before he leave the world. He feels honor and pride; because he had saves more people life from his old days. And the final, he feels lucky and proud to have his perfect family he ever had. He is feeling generous of his life he had before.

Until Anthony goes to bed and face his expiry, the entirely family rounded up the place he laid and mourns miserably. Even he’s been rejected from the Grim Reaper to stay for a while; he left the family with relieves and elated smile, leaving the gold gravestone with them as a memories… 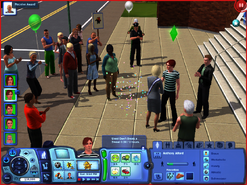 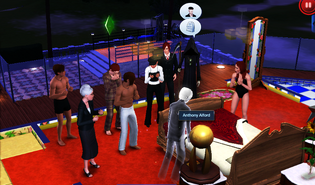 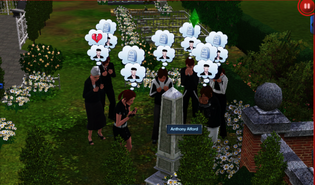 Anthony Alford's Funeral
Add an image to this gallery
Retrieved from "https://sims.fandom.com/wiki/Fanon:Anthony_Alford?oldid=793614"
Community content is available under CC-BY-SA unless otherwise noted.