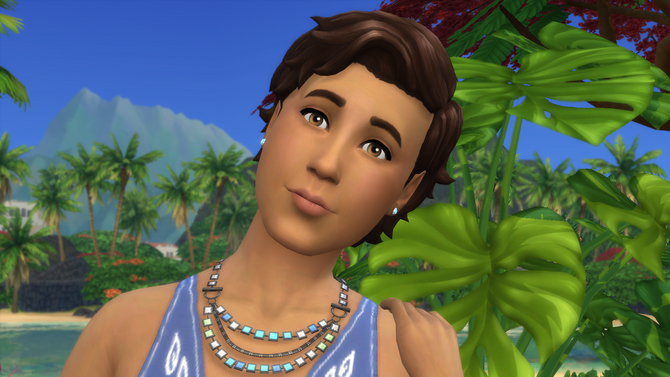 Listen  /ˈæn ˈʃvaɪɡər/) or Ann Roimata (née Livingston) is a pre-made Sim that appears troughout the whole The Sims series.

In all games she appears as a medium-brown skinned woman with green eyes and a neck-length dark brown hairstyle.
Usually she wears a dress in her favorite color blue. In The Sims 4 however she is first seen without a dress, but rather in flowy shorts with black leggings and a layered top. Like with most outfits she wears natural make-up and simple jewellery such as a necklace and earrings.

Ann originally appeared in The Sims where she lived with her husband Satinav Schweiger and their three children Raoul, Deliah and Connor in the Schweiger mansion. In The Sims 2 she already died of old age, leaving her children and grandchildren behind.
The spin-off title MySims features a younger version of her as a potential Townie, who can be asked to move into the player's town, while The Sims: Castaway Stories tells an alternate story of Ann, in which she never gets to marry Satinav and is stranded on Felicity Island. Not finding a way off the island until the end she falls in love with one of the natives and marries Kiri Roimata instead.
The The Sims 3 is a prequel to her life, where she is still a teenager living with her parents, Ursula and Niles Livingston. The Sims 4 continues the story of The Sims: Castaway Stories. Ann and Kiri eventually left Felicity Island behind and moved to Willow Creek.

Niles and Ursula Livingston were a newlywed couple, who moved to Autumn Falls in their young adulthood. They moved there not only because Niles got a very good job offer in the business career, but also because it was a scenic little town in the countryside, which they thought would be perfect to settle down in and start a family. Ursula was already looking forward to jog through its name-giving autumnal landscape once in a while.
Roughly a year after, Ursula became pregnant. And in the early summer she gave birth to their first and only child, their daughter, who they named Ann.

Ann soon turned out to be a real sunshine. She grew up to be a very generous and kind-hearted girl, who easily made many friends in school and did her best to help out the people around her. Her parents couldn't be more proud.
One day she met a very curious little boy, who was avoided by the other children. It was the young Satinav, the heir of the notorious Schweiger family. The Schweigers had the reputation of being very gloomy and mysterious. Many rumors were told about them, but Ann did not care about any of that and wanted to befriend him anyway. She treated him like anyone else and with her bright personality she soon was able to become very good friends with him. Best friends even.

The years passed by. Ann and Satinav soon became teenagers and they grew very intimate. Their classmates in school were debating if they were going steady, because of how close they were. But no. Ann and Satinav wished to simply stay friends. And that actually wasn't only, because of their friendship's sake. No. They both had discoverd something about themselves as teenagers. It was a secret, that they only told each other about. Both had way more interest in the same gender when it came to romance, than in any other.
Satinav wasn't really happy about it and was denying it profusely, but Ann knew that what they felt was true. Still, it wasn't very easy for him to bear the truth, especially since his parents were already pressuring him to soon marry a girl. After all he was their only child and was carrying the whole weight of the family's legacy upon his shoulders. His anxiety grew with each year that passed.
Could Ann do anything for him?

As she turned 18 years old, Ann desperately wanted to see a bit more of the world. Her whole life she had spent in Autumn Falls and she felt like she was missing out. She asked Satinav to hold it out a bit longer while she was gone and promised him to come back in a few years. And if he had not found anyone to marry until then, she would marry him.

For her 20th Birthday Ann got a ticket for a cruise on the Queen Solomon as gift by her parents. In the main timeline this was her last trip before she returned to her home town. As she promised, she shortly thereafter married Satinav.
After the marriage, she moved into the creepy old Schweiger mansion with him and his parents, Xavier and Abigail. She wasn't feeling very comfortable there, but as long as Satinav was with her she could endure it.

Otherwise everything was going fine. To the outside they looked like the perfect generic couple, but one thing was still missing to make the facade completly convincing. They had to have children together.
Ann was being positive. She always wanted children of her own anyway. It's been a dream of hers. But the circumstances made the whole thing awkward.
Nevertheless they soon were able to gift their parents their first grandchild. It was a boy, that they named Raoul. Xavier didn't make it to see his grandchild's birth though as he died of old age during Ann's pregnancy.
After he was gone the atmosphere in the Schweiger mansion went up a bit and the place felt less uneasy for Ann. She even noticed that Abigail began to smile more than she used to. Was the birth of Raoul bringing more life into the old house or did something else cause her to feel more at ease?

When Raoul was a child, Ann got pregnant again. This time it was a girl, who they fittingly named Deliah. Abigail died of old age when Deliah was still a toddler. The old generation was now gone and made room for the new generation.
Having two children wasn't enough for Ann though and she wanted at least one more child. That's how she soon became pregnant with Connor, their third and last child.
Now it wasn't long after Ann's parents got ill and died shortly after. Unlike the death of Satinav's parents this has shaken her up quite a bit and only with the support of her children, Satinav and her closest friends she could overcome this burden.


Meanwhile Ann enjoyed raising her children a lot, while Satinav was more focused on his career and his hobbies. It's not like he didn't like his children, he just had trouble getting close to them.
Soon Raoul got married to his crush Ida. It was a very small wedding, but it was one of Ann's happiest moments in her life. Satinav was at the wedding aswell, but he wasn't in a good shape. As Ann feared he soon died of old age. It was devastating for Ann, but she learned from her parent's death and made the best of it and kept looking forward. But not too long after Deliah headed off to college, Ann also lived the last few days of her life before she peacefully died of old age in her sleep.

Life leading up to The Sims 3 Edit

Life leading up to MySims Edit

In MySims she appears in the player's town and can be asked to move in. Her ingame description reads the following:

„Ann got bored of her old life and wanted to discover something new! She is easy making friends with and is generally someone very pleasant to talk to. If your town is full of friendly Sims and interesting things she will fit right in!“

Life leading up to The Sims: Castaway Stories Edit

On her 20th birthday Ann's parents gave her a ticket for a cruise. In this alternate version of her life however the ship sank and Ann stranded on Felicity Island. The remaining story equals the story of Shipwrecked and Single. In the part where she could choose with whom she wanted to go out she chose Kiri Roimata. She works as an Artisan in the crafter career.

Life leading up to The Sims 4 Edit

Ann's alternate life from The Sims: Castaway Stories continues in The Sims 4. She moved to Willow Creek with her wife Kiri Livingston.

Ann's design in The Sims. 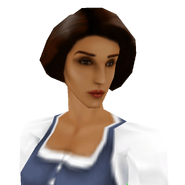 A headshot of Ann. 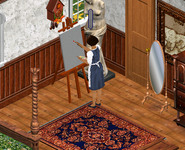 Ann drawing on an easel in her bedroom.

Ann watching her daughter play the piano.
Add an image to this gallery 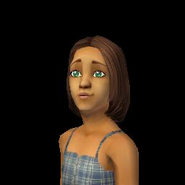 How Ann would have appeared as a child in The Sims 2. 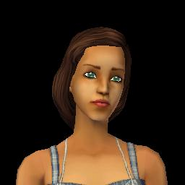 Ann Schweiger as an adult. 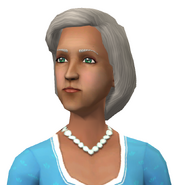 Ann as an elder.

Outfits in The Sims 2.

Ann as a child with her Parents.

Edgar Schweiger learns to walk from his grandmother Ann.

Ann as ghost, haunting in the old room of her daughter...
Add an image to this gallery

Ann's biography and interests in MySims.

Ann smelling the flowers.
Add an image to this gallery

Ann as she's about to enter the Queen Solomon. 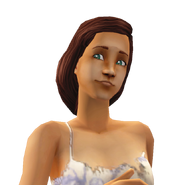 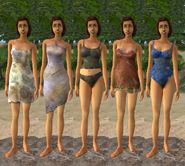 Outfits in The Sims Castaway Stories.

Hair Style and Outfits in The Sims Castaway Stories after the story mode is completed.

Ann writing in her diary.

Ann eating fish caught by herself. 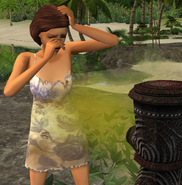 Becoming infected by the mysterious disease. 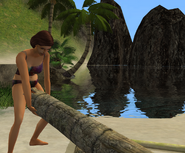 Ann trying to build a raft. 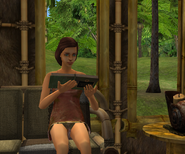 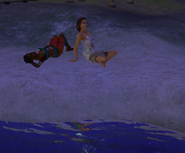 Watching the night sky with Kiri.

Proving that there is no curse by kissing Kiri. 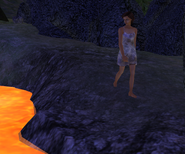 Ann at the lava pools on the vulcano island.
Add an image to this gallery

Ann as a teenager in The Sims 3. 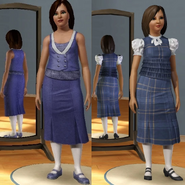 Old versions of her in The Sims 3.

Ann talking with her mother Ursula.

Ann as a teenager drawing at the beach.
Add an image to this gallery

Ann as she would've appeared as a teen in The Sims 4.

Ann's current design in The Sims 4.

Outfits in The Sims 4.

The first recreation of Ann in The Sims 4 (CAS Demo).

Kiri and Ann at pride in San Myshuno.
Add an image to this gallery

Retrieved from "https://sims.fandom.com/wiki/Fanon:Ann_Schweiger?oldid=883915"
Community content is available under CC-BY-SA unless otherwise noted.