Fanon article ownership
This fanon page was created and is owned by Carman39 (talk). Unless the edit is constructive and/or minor (such as fixing a template), please do not edit this page unless given permission from the author.
Angela Diane Broke (neé Pleasant) is a Sim living in Belladonna Cove. She is the daughter of Mary-Sue Pleasant and Daniel Pleasant, the twin sister of Lilith Pleasant, older sister/adoptive niece of Robert Oldie, niece of Jennifer Burb, cousin of Lucy Burb and Marly Burb, granddaughter of Jeff Pleasant and Diane Pleasant, adoptive granddaughter of Herb Oldie and Coral Oldie, wife of Beau Broke, amd mother of Bowie Broke.

Angela was raised with a twin sister named Lilith, and by her work addicted mother Mary-Sue, and love rat father Daniel. Angela was originally enemies with Lilith, and she eventually ran away. Mary-Sue became pregnant with her third child, and a son named Robert was born. But when things got out of control with Angela becoming just like Lilith and Lilith's disappearance still a mystery, Robert was neglected and taken away. After being juggled from house to house, Robert ended up with Mary-Sue's adopted parents and was raised as the Mary-Sue's brother rather than son. A family reunion went wrong, when two separate fires broke out and killed Mary-Sue, Lilith, Robert, Jennifer, John, Lucy, Marly (Jennifer and John's second daughter). as well as the twin's grandparents. Daniel and Angela were the only survivors. With the house burned down, Daniel and Angela moved in with Brandi Broke and her three sons Dustin, Beau, and Shane. Angela was already in a relationship with Dustin, much to Daniel's chagrin. The fire caused Daniel to become ill, and he died soon after moving in. Angela found a mother figure in Brandi, and she helped Brandi out when she got fired. Angela also potty trained Shane, became friends with Beau, and got Brandi a new job. This all impressed Dustin, who made it his mission to marry Angela when they got older.

Angela and Dustin were soon sent off to college, choosing Academie Le Tour to study at. They moved in to a ten room dormitory and hit it off with the others living in the dorm. Angela originally was attracted to Dustin because of his typical bad boy style, but later realised his sensitivity when he revealed how much he missed his father. Angela fell even deeper in love with Dustin and began planning a proposal, unaware he was planning the same. Eventually, Dustin proposed to Angela, and she accepted. They began planning a life together, to begin once they graduate. Their engagement was cut short soon. A cheerleader began flirting with Angela, and at once point goosed her, with Angela simply laughing it off. Dustin took this the wrong way, but instead of taking it out on the cheerleader, he went straight for Angela, and hit her. Angela was heartbroken by Dustin's violent outburst, and moved out of the dorm, ending the relationship. Angela never saw Dustin again. Angela moved into an on-campus house, where she studied harder and finally graduated with highest honors, Summa Cum Laude.

Angela returned home to the Brokes, with the intention of moving out straight away to avoid Dustin. But Brandi informs her that Dustin tragically died after locking himself in his room to the point of starving. Angela stays with the family to help them get through their grief, but Angela doesn't grieve, having forgotten their relationship completely. Angela found herself attracted to Beau, who by the time Angela returned had became a fine young man. Eventually, she acted on her attraction and she and Beau began dating. The family moved to Belladonna Cove. Soon, Angela and Beau move into an apartment of their own and get married. Soon, Angela became pregnant. During her pregnancy, she and Beau adopted two dogs, Webster and Pinky. Eventually Angela gave birth to their first child, their son Bowie. A few years later, Beau's brother Shane was abducted by aliens, which lead to an unwanted alien baby being born. Angela and Beau soon decided to adopt Shane's daughter Audrey, and raise the alien as their own. To explain the baby's green skin, the couple decided to pretend as if the child was born with a skin condition. After it became too hard to raise the baby, they gave her back to Shane, who gave her up for adoption. 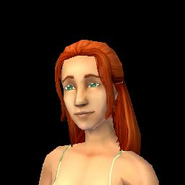 Angela as a teenager.

Angela as a young adult

Angela as she was pregnant with Bowie
Add an image to this gallery
Retrieved from "https://sims.fandom.com/wiki/Fanon:Angela_Broke?oldid=837931"
Community content is available under CC-BY-SA unless otherwise noted.