Anastasia Maria-Teresa Vanderburg "Ana" is Princess of Hidden Springs. She was born at Vanderburg Palace as one of the twin daughters of Catarina and Renauld Vanderburg. She was the second of the twins, born three minutes after her sister, Alexandra. She is an architectural designer and has become something of a fashion icon. She is cultured and refined, enjoying fine art, fine cuisine, fine books, and fine music. She is of primarily Dutch and German extraction.

In many ways, the twins' existence owed itself to the disappearance of their older sister, Francisca. The palace had spent lots of time and money on the search for Francisca but to no avail. Catarina was consciously seeking a child to replace her lost daughter, but she got more than she bargained for when she birthed twins -- double the fun and double the trouble.

Anastasia and her twin sister, Alexandra, grew up in a life of privilege. Their mother ensured their top-of-the-line education at the ultra-exclusive Smuggsworth Preparatory School as soon as they could walk, and before they'd even enrolled officially in the institution, they'd had private one-on-one tutoring with some of the world-renowned professors.

Anastasia's artistic inclinations were evident from an early age. One day, Catarina walked in on Anastasia watching a program on the History Channel.  Little Anastasia was fascinated by the buildings she saw. When she became a child, she asked for art lessons, which her father, Renauld, gleefully paid for. He bought her sketch books, easels, and art pads, which her mother would constantly hide from her. She would spend hours alone and content with her easel or sketch book, which her mother hated because she wouldn't talk to other children except her sister. Ironically, Anastasia inherited her artistic leanings from her mother.

As the twins reached their teens, the results of their Smuggsworth education were really beginning to show. At the same time, though, they were developing distinct differences in their personalities. While Alexandra was more athletic and outdoorsy, preferring to ride great distances on horseback and playing all types of sports, Anastasia was cultured and refined, enjoying painting, drawing, sculpture, musical theater, and the opera.

All the while, however, the girls were pretty much isolated from the rest of the family -- and from everyone else. They truly became an island amongst themselves, creating an elaborate imaginary world to which they alone would retreat to, with imaginary friends named Lucky and Patches with whom they'd communicate their deepest, darkest secrets to. One time, Anastasia locked herself in the bathroom with her imaginary friend doll for four hours in an effort to avoid returning to Smuggsworth Prep School. Both girls had been bullied as teens, Anastasia even more so because she was overweight, and she wrote tearful letters begging to return to Vanderburg Palace. Catarina ignored the letters.

In fact, they were summoned from Smuggsworth only once -- to attend the wedding of their half-brother, Crown Prince Sebastian, to Miss Ella Carlisle, a young woman from the Hidden Springs community.

Finally the girls graduated Smuggsworth Prep School and became young women. Immediately after graduation, Anastasia hired independent staff for herself and her sister, apart from those already working for the Vanderburg family. At the advice of their new agent and manager, they underwent plastic surgery and liposuction, and completely made themselves over physically. The girls' new agent and manager entrusted stylists Domingo and Arianna Kincaid with their makeovers. The makeovers were a resounding success as the girls posed for their first magazine covers. And the transformations were not just physical. Because they'd shed their baby fat, they grew more confident as young women. It was a chain reaction that led to them signing a deal to star in a reality TV show, Vanderburg Squared.

In the very first episode, Renauld dies unexpectedly. The girls are devastated by the loss. The rest of the episodes so far are about how each girl copes with the loss. They plan an elaborate funeral dinner for their father, without any input from their mother. Anastasia serves as the unofficial hostess of the gathering.

As an overweight teen, Anastasia was shy and self-conscious, with mostly her art pad as her only companion. But since the surgeries she has begun to show signs of emerging from her shell. Despite the objections of her mother she began construction on a project she admits "means more to her than anything she's ever done" -- the family crypt, which she herself drew up the plans for. An architecture and design student, Anastasia spends a lot of time at her drawing table. But now she's taken over for her sister-in-law, who just gave birth to her second child, as chairperson of the Hidden Springs Heritage Festival planning committee and promises that the festival will be bigger and better than ever this year. She's also running the holiday toy drive. She seems to have a knack for party planning, even if she's not much for attending the gatherings themselves.

In response to what she felt to be her daughters' defiance, Catarina made them an ultimatum:  They had to get married within ten simdays, or forfeit any rights to their sizable inheritance.  The girls came up with a plan -- they would turn their imaginary friend dolls, who had been their companions since their earliest childhood, into real, flesh-and-blood Sims, to comply with the edict.  Would this plan work or backfire?

Anastasia's dean, Dr. Madeleine Noetal, was impressed by her admissions resume, but nonplussed by her actual performance in class. Dr. Noetal even went as far as to write a letter to Anastasia's mother, Catarina, the Queen of Hidden Springs. For her senior research project, Anastasia was asked to draw up plans to remodel a selected building on campus.

Anastasia and Alexandra are both members of Tri-Fruhm Sorority, even though they do not live in the sorority house. They maintain a separate residence from their other sorority sisters but are recognized as full members. They were initiated by Tri-Fruhm member Samantha Grey. She is a member of both the Jocks and the Rebels social groups.

Anastasia kissed fine arts classmate Derek Khan at a party, but doesn't remember doing it and denies everything.

During her senior year, Anastasia led a protest in the quad against bullying, revealing that she herself had been mercilessly bullied while enrolled as a student at Smuggsworth.

After receiving her degree in architectural design (fine arts) from Sims University, Anastasia returned to Hidden Springs and began to make her mark. She set about transforming the old Redwood Heights Lodge into a functioning luxury resort destination.  After that, she opened her own interior design firm in a collaboration with her friend Taylor Wentworth.  Before attending Sims University, Anastasia was also responsible for remodeling Lars' Disco-Tech, a popular nightclub in Hidden Springs.

In April of 2013 Anastasia announced her engagement to her former imaginary friend, Lucian. Some said this was a publicity stunt after her affair with Derek Khan. The engagement came ironically just as she'd planned to break up with him. She has named her twin sister Alexandra as maid of honor and her sister-in-law, Ella Carlisle Vanderburg, as matron of honor for her wedding, which is rumored to be taking place in Monte Vista. In addition, she has named psychic Valana Ayres and college pal Samantha Grey as bridesmaids. Anastasia admits she is a "bleeding heart romantic;" however, she and her fiancé have come to a disagreement over children. He wants to begin a family immediately; she wants to wait. 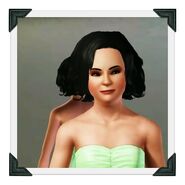 Anastasia in her official palace portrait as a teen. 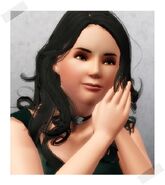 Anastasia before her surgery 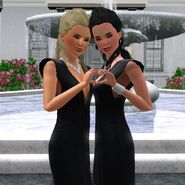 Anastasia with her twin sister, Alexandra, in a promotional image for their reality-TV show, Vanderburg Squared.

Anastasia sitting outside one of the buildings she designed.

Anastasia at her drawing table.

Anastasia speaks out against bullying during a protest on campus.

Anastasia with her Persian, Duchess. The cat was a gift from her fiance, Lucian.

Anastasia strikes a pose for a magazine. She was offered a modeling contract but declined.
Add an image to this gallery
Retrieved from "https://sims.fandom.com/wiki/Fanon:Anastasia_Vanderburg?oldid=752623"
Community content is available under CC-BY-SA unless otherwise noted.