Ana Mace (née Curious) is the daughter of Drew Curious and Aiyana Curious and also the older twinsister of Emma. She mostly resembles her mother while her sister looks more like her father.

She married Blair Mace and got a son named Kevin.

Her father was engaged to Genesis Curious while he cheated on her with Aiyana. Genesis broke off the engagement and Drew married Aiyana, resulting in the pregnancy and birth of the two girls Ana and Emma.

Their babyhood was a bit chaotic, as Genesis decided not to move out and stay in the Curious household. Thereby Aiyana lost interest in the girls, what made Genesis change their diapers and feed them their bottles.

When Ana was a toddler her parents made more effort, so she learned her toddler skills which Drew taught her.

Together with Emma, Ana got accepted in to private school. She didn't make so much friends and could be described as a 'loner'.

Ana chooses the fortune aspiration and she becomes good friends with a distant relative Harper Curious. When her mother turns into an elder her parents leave the house and Ana stays together with her sister Emma and Lars.

As an adult Ana becomes friends with Emma's ex-boyfriend Blaire Mace. Slowly this friendship turns out to be more than 'just friends' and they share their first kiss. Ana is terrified because she knows that Emma will hate her forever if she starts dating her ex-boyfriend, but she can't seem to stay away from Blair. As predicted, when Ana and Blair tell Emma that they are together she freaks out, even though Emma is in a relationship with someone else.

Blair and Ana decide to ignore Emma and keep dating each other. When they move in together they share their first WooHoo and later Blair proposes to her. Later she discovers her first pregnancy, Kevin Mace, their first son is born. Unfortunately both her parents die around this period. Drew during her pregnancy and Aiyana when Kevin became a toddler.

Even though their love is strong, Anna finds it difficult to live together with her sister Emma, as she still acts extremely jealous. This for multiple reasons; Anna's relationship with Blair and her ability to get children. The tension in the household stays.

One strange night a fire breaks out while Anna and Blair are asleep, Emma and her husband Léon were at work. When Emma arrived back home she calls the fire station, but they were too late. Anna and Blair had died in the fire, but strangely enough Kevin was safely outside. 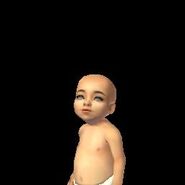 Ana as a baby. 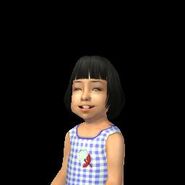 Ana as a toddler. 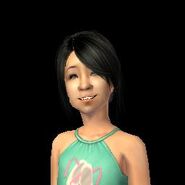 Ana as a child. 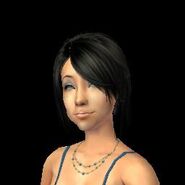 Ana as a teen. 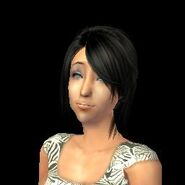 Ana as an adult.
Add an image to this gallery
Retrieved from "https://sims.fandom.com/wiki/Fanon:Ana_Mace?oldid=743037"
Community content is available under CC-BY-SA unless otherwise noted.