Alistair is the adopted son of Roger and Elsa and the Twin Brother of Imogen Space. His original parents died in a skiing accident when he was only a Baby so he doesn't remember who they are but he loves living with his new family. He is the calmer of the Twins even from a young age.

Before he was born, Alistair was born to a happy family who couldn't be happier with their twins! Life could not have been better. They happily lived in a log cabin in Three Lakes.

As a baby, Alistair and his twin sister had a great life. Their parents took great care of them however they had to go into care as they're parents were killed in a skiing accident. He was treated well but the care workers tried to find Alistair and his sister a new home as soon as possible!

As a toddler, Alistair and his twin were adopted by Elsa and Roger. He was delighted to have been adopted as he liked all the care and attention he was being given. He didn't quite realise that he had been adopted by one of the richest families in Lavisha! Even as a toddler he showed great talent on the xylophone and his parents hoped this could be a sign for future potential and bought him a violin in anticipation.

As a child, Alistair and his twin sister were very interested in the paranormal which was lucky as their father was an alien. They heard about a woman who painted what she dreamed and they asked to see it for their birthday. At the exhibition, their mother didn't seem to be interested. To be fair, Roger wasn't either but he lead them round as they tried to spot themselves in her art. Suddenly, Elsa ran out of the exhibition. They were confused, what was wrong? Alistair noticed his Mum's distracted nature and tried to convince her to end her search. However she rejected his offers leaving Alistair feeling like he couldn't help anybody.

As a teen, Alistair was moody and rebellious. He didn't like any of his family really as he thought they all misunderstood him. The only sim who understood him was the beautiful Kayla. She was the most beautiful sim in the school yet she chose to go out with him. He was thrilled. Kayla was kind to Alistair and accepted him for who he was. Alistair was feeling quite annoyed with life with made him vunerable and the only person who he liked was his twin, Imogen. However he did sometimes let her take advantage of him. He even dressed up as her one-day when she had to go to a club but he had nothing better to do. Her argument was that they looked 'almost the same'. Imogen failed to mention it was a swimming club and Alistair admitted to it immedaiately. Alistair and Imogen soon were old enough to go to college so they decided to go to Sim State University.

As a Young Adult, Alistair and Kayla moved into a dorm with some friends. College was great although Alistair was a little worried about Imogen... She was with a man called Klaus who was known for being... Mean. However Imogen liked him and so he left them alone. Alistair really liked Kayla and wanted to be with her for the rest of their lives but he wasn't sure if it was too earyl to propose. Kayla decided it wasn't and proposed to him saying that she loved him and wanted to be with him for the rest of their lives. They got a shock when Imogen turned up to 'visit'. He knew something was wrong. Alistair decided to take Imogen out to dinner to see if he could find out what had happened, however she insisted it was all Okay and this was a normal visit although it was obviously not.

Alistair was looking forward to getting back home but when he came back, there was no home, just a black charred shell of the house. Alistair ran inside the wreckage hoping Kayla had escaped. She hadn't. Imogen rang the police and ambulance but Alistair just held Kayla's lifeless body in his arms. The girl he loved was dead. Alistair was never the samae after that. He dropped out of college soon after Imogen moved out. His dad asked if he wanted to come live wth him but Alistair said he had... Other accommodation. The other accommodation turned out to be Villa de Sol. Alistair partied every night with the locals and even began dating the beautiful Cara, the belle of Twikki island. Roger was cross at him spending lots of money and messing up the house but there was really nothg he could do.

As an adult, Alistair carried on his lifestyle until one day he got a call from Roger who told him he had 2 weeks to come home before a joint holiday with Allen. Alistair said no but when Roger said that he's cut off his allowance, Alistair agreed. He hired a maid called Hope who he liked but she didn't and left him feeling depressed and unhappy back at home. Roger said he could come on holiday but he felt too miserable. While his dad and step mum were on holiday, he just stayed at his childhood home, moping. One night he ran away but came back remembering, they weren't home, they weren't back for a few days. Nobody even knew he was gone.

He missed Kayla so much, he dreamt about her everyday, he visited her grave at the Sim State University whenever he could but none of this would ever change the fact she was gone. He thought of many 'great' ideas of what to do with his life, but most of them depended on other people so he scrapped them all and just sat around, feeling miserable waiting until his parents returned so he could share his misery with them too. Around the time Roger and Audrey aged up, Alistair had a sudden realisation. His parents were old and they could not support him for long. He decided to go to Imogen who coincidentally was just having a beautiful house built with a POOL AND A HOT TUB which would REALLY help him relax. He told his parents and they were surprisingly eager for him to go. Imogen was surprisingly not eager but agreed as long as he didn't sulk or mope.

Alistair felt a little better and readier to 'get back out there' into the world of dating. Alistair found out that Imogen's girlfriend Ola had moved in who he didn't get on with at all. Ola disapproved and was annoyed by Alistair's moping. She thought he was a waste of space and he felt a need to prove her wrong. He went apartment hunting and agreed to go to online dating. He met a girl called Ruby and they agreed to go bowling. He would've laughed at Ola's expression if he wasn't trying to keep his cool. When he came in Ruby seemed great, chatty and funny. But after a minute or so, it was clear, Ruby was more annoying than Ola and he was stuck with her for a WHOLE NIGHT! He begged fate to help him and it worked! There was a mixup with the bowling lanes and they ended up with a third person called Trudy. During his date, Alistair felt that Trudy was way more compatible with him than Ruby. By the end of the night he had Trudy's number and had arranged a date with her while he politely said goodbye to Ruby and that he would probably call her... never.

He rung Trudy up and they went out to a restaurant. Alistair noticed Trudy was a little bit of a risk taker like when she convinced him to skip the bill and he was surprised to find out he didn't care. He brought Trudy back to his sister's house and they went swimming in Imogen and Ola's pool making a lot of noise, so much that Ola stormed out and scolded them both saying that they had woken up Charlie, Margerat and Lily which was NOT ok. She sent Alistair to bed and Trudy home. Alistair didn't care though because for once in his life he's met somebody who he had taken his mind of Trudy and reminded him he could love again.

He was very upset when his step mother, Audrey and later, father died and he seemed to be about to go into the depression and mopiness he felt when Kayla had die. However, this time around he had Trudy to help him and as it was more of a shared loss, his twin sister came through and they mourned together. Throughout this time, Alistair felt more and more comfortable with Trudy and decided that he was ready to take a leap and ask her to marry him. He planned a romantic evening for her and of course she said yes to his proposal. For the first time in a very long time, Alistair felt happy about his future 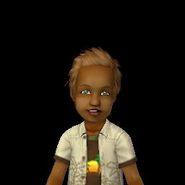 Alistair Space as a Toddler. 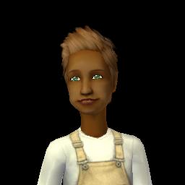 Alistair Space as a Child. 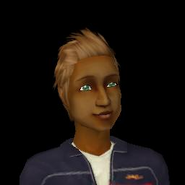 Alistair Space as a Teen. 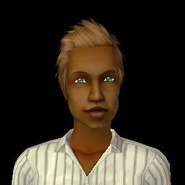 Alistair Space as a Young adult.
Add an image to this gallery

Retrieved from "https://sims.fandom.com/wiki/Fanon:Alistair_Space?oldid=730589"
Community content is available under CC-BY-SA unless otherwise noted.