Alfred Garvouis is the second child of the very successful couple Isaac and Constance. He lived all his life in the Remington manor, the first mansion of the family, despite a long-lived feud with his older brother Wyatt. He also has a half-brother he never knew of, and a younger sister, Ursula.

Alfred was born at the hospital, in the quiet town of Riverview. His parents were already very well-off when he was born, and had already a son, Wyatt. This, however, meant that he was quite emotionally neglected the first years of his life, even as far as sleeping in a very distant room, and being taken care of by the family's butler, Irina Bulls. The latter would become his close friend.

At a certain point, his mother Constance made an effort to be more present in his life and taught him all his toddler skills. However, she was at the same writing novels and couldn't keep up, and his father was always busy crafting new inventions.

When Alfred grew up into a toddler, his mother realized she was pregnant and his father got into serious trouble being caught red-handed detonating stuff.

His sister, Ursula, unlike him was born at home and she would become Alfred's best friend.

After Ursula being born, Irina got electrocuted after trying to fix the radio station with a muddle of water beneath it. She died consummed by a fire. Despite being very little, Alfred has memory of the event, which scarred him for life.

When After grew up into a child, he learned of his father's inventions and was fascinated by the Time machine. He wanted to be an inventor just like his father and hoped that starting to invent as well would deepen their bond. He was jealous of Wyatt, who was his father's favorite.

At first, school was challenging for Alfred, as he was being targeted by bullies. Ursula helped him out of trouble, though, and two started studying together.

His favorite hobbies mainly consisted of collecting gems and bugs, playing at the Chemistry station, and, oddly enough, talking to the ghost of Irina at night, when he thought nobody was looking.

Alfred grew up and became mean spirited. The envy for his brutal grew into a mutual dislike between the two.

Not resisting the urge, Alfred started pulling various pranks on his brother and the two became enemies. His good grades made up for his bad behavior, but he still got grounded many times, while Wyatt went on without reproach, which further upset him. He even went as far as scaring Wyatt's girlfriend away by pulling the same pranks, as he had seen her taunting his sister.

When the prom night was close, Constance, Isaac and Wyatt, who was now an adult, went for a trip. He threw an awesome party with his sister and high school colleagues, but it was so loud that the a policeman had to come check the place. Luckily, the party had already ended when he did. The adults didn't suspect a thing, upon returning.

Ironically, even after the party he had thrown, he still struggled to find a Prom date, and his photo was taken solo. He was elected Prom king, and starting crushing on the quiet, kind Whitemary.

He was now extremely annoyed that Wyatt was happy with his new lover, Melanie Cole, who had just moved in. He tried to scare her as she was a Coward, even drinking a potion that would let him become a ghost. However, her love for Wyatt was superior.

At the day of their wedding, in a public ceremony thrown at home, Alfred is nowhere to be found in the family photos. That is because he decided to go gardening instead.

Little Rosaura was born shortly after.

His hobbies as a teenager consisted mostly of inventing, and he started sleeping in a bank bed in the garage, right next to his inventions. He was also fascinated by talking to ghosts.

As soon he grew up into a Young Adult, and was of age, he started a career in Science. He was promoted very quickly as he never got tired of working. He ended also his relationship with Whitemary for no longer being appropriate, and began dating previous butler, Feliciana, which caused Wyatt to ridicule him even more for supposed lack of options.

After writing the novel that would be her last, his mother died almost immediatly succeeded by the death of his father.

Wyatt wanted Alfred to leave, but Alfred refused to do so claiming the place o be rightfully his as well. Ursula tried, in vain, to comfort and even defend Alfred but was starting to get afraid of her brother's addiction to detonation. Wyatt, being a firefighter himself, wasn't at all worried.

Ursula came back from the Time Machine, after numerous trips to medieval times, with a daughter almost the same age as she was, named Jane. The girl didn't really fit in and rebuffed all romantic advances as she thought Modern Riverview menSims weren't real MenSims.

Ursula came to Alfred panicking after she had seen Jane go on the Time Machine, but never returning. She wanted to go look for her herself. However, Alfred realized the The time Machine was broken, so that would be a futile attempt. Much to everyone's dismay and Ursula's grief, they decided they should get rid of the time Machine. Alfred started to work on a new one, but it would take many years.

Alfred had difficulty trying for a baby with Feliciana, who was much older than he was.

When Wyatt and his wife were late into their adulthood, they still had no other children, which seriously concerned them as the heir to Garvouis should be male. The lovely Rosaura, from childhood, had expressed she was not interested in the kind of life Garvouis's and was captivated by the occult. Wyatt pressured his daughter so much into accepting the responsibility, that one day, she was gone. Nobody was aware of her whereabouts.

Days later they received a letter from a unknown post from their daughter saying she was okay but she would never return. Both parents were very distressed by this but it didn't affect Alfred quite that much. He was actually quite pleased with the possibility of being the new heir.

However, Melanie got pregnant and gave birth to twins, Bianca and Alphonse. And he learned Wyatt and Melanie had resorted to fertility treatments they claimed as natural in order conceive. He was angered and sensed that no one trusted his and judgement. Wrathful, (...) 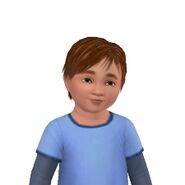 Alfred as a toddler. 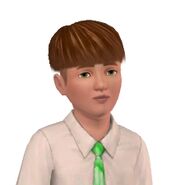 Alfred as a child. 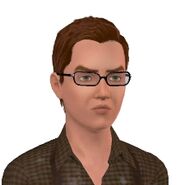 Alfred as a teen.
Add an image to this gallery
Retrieved from "https://sims.fandom.com/wiki/Fanon:Alfred_Garvouis?oldid=878031"
Community content is available under CC-BY-SA unless otherwise noted.