The Sims Wiki
Register
Don't have an account?
Sign In
in: Fanon created and owned by Freedom50000, Evolving fanon, Sims (fanon),
and 21 more

Alexavier Dion Reaper is the son of Darrell Hauser and Eloquence Reaper. He is thus grandson of Aricin and Sandi Reaper and Kristin Hauser. His great grandparents are Grim and Arabella Reaper and Molly French and great aunt is Avariella Reaper. He has two aunts; Estelle Reaper and Irma Hauser; and an uncle, Melchior Reaper.

Alexavier was raised almost entirely by Arabella to the point where he thought she was his mother. It was hard but Arabella managed to gently explain to him his heritage and why his mother couldn't be around so much. From then on things were always off for Alexavier and Arabella seemed to be the only who noticed. When she died, the last bridge between Alexavier's feelings and the rest of the world burned down.

Throughout high school, Alexavier ignored his school work and began looking for ways to get his mother's attention, but his attempts were almost always in vain. He begun looked for someone else to feed his need for attention. His natural good looks made him every teenage girl's target. Alexavier became the town's womanizer and always had a girl at his side.

One day, Alexavier met Miki Yanez. The popular socialite at school. The two clicked and began dating and shared each other's first kiss. Though Miki remains faithful to Alexavier, Alexavier secretely does not return the favor.

Alexavier- An American name meaning "Protector of the New House". This suits him as he is the next heir to the Reaper estate after Eloquence.

Dion- A Greek name short for Dionysus, the god of wine and rivalry. 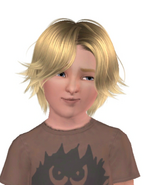 Alexavier as a child.
Community content is available under CC-BY-SA unless otherwise noted.