Alexander Goth is the youngest child of the late Mortimer and Bella Goth. He is also the younger brother of Cassandra, and the older half-brother of Francesca. Dina Goth is his stepmother, but Alexander detests her. He is also the uncle of Dylan Dreamer. Currently, he is dating Angela Pleasant.

Alexander was very young when his mother disappeared, so he was understandably distraught. In this time, he was mostly cared for by his older sister Cassandra. When Cassandra began dating Don Lothario, Alexander was concerned because he didn't trust Don. He did his best to comfort his sister when she was left at the alter by Don. He was very happy when Cassandra entered a relationship with Darren Dreamer, and even happier when she married him and gave birth to Dylan.

Not long after Cassandra moved in with her husband, Mortimer got married to Dina Caliente. Alexander disliked Dina, believing her to be a gold digger (an assumption that was entirely correct), but he loved his younger half-sister anyway. When Francesca was still a baby and Alexander had just grown into a teen, Mortimer passed away from old age. At this point, Alexander decided to take a large role in the care of Francesca, since he didn't trust Dina too much.

Currently, Alexander is at college, living in a house with his girlfriend Angela, Angela's sister Lilith, and Lilith's boyfriend Dirk. He is constantly trying to get Angela and Lilith to stop feuding, to no avail. He and Angela are saving WooHoo until after they get married, unlike Lilith and Dirk. 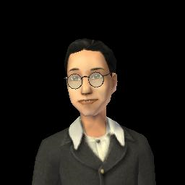 Alexander Goth as a child. 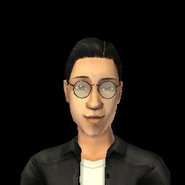 Alexander Goth as a teen.
Add an image to this gallery
Retrieved from "https://sims.fandom.com/wiki/Fanon:Alexander_Goth_(imageneralwheee)?oldid=778611"
Community content is available under CC-BY-SA unless otherwise noted.