Fanon of Preexisting Sim
This page is about a preexisting Sim in a fanon setting. This article should not be treated as an canon article. For information about the canon Sim, visit here: Alexander Goth

Not to be confused with Alexander Goth.

Alexander is always neat and proper. Most of his wardrobe is either black, grey or purple.

Alexander sees plenty of people, but recognises very few of them. He remembers Cassandra, who gave him a soft teddy bear to look at in his crib. Sometimes his parents or uncle come into the nursery to play with him or feed him or change his diapers.

Alexander already enjoys learning. He has two parents, a big sister and an uncle that are more than willing to teach him. He prefers educational toys over regular ones. Bella often picks him up and rocks him to sleep on the rocking chair in the parlour.

Alexander grew into a very well mannered child. He started school, but made very few friends. He already had a reputation for being that weird girl Cassandra's younger brother. Not that it bothered him much. Often telling himself, "We'll see how cocky they are, when I own the valley."

When he was coming out of school, an adult woman looked over at him and asked him if he was a Goth. He replied that he was. She smirked and walked way, leaving poor Alexander confused.

Alexander became something of a writing prodigy, he wrote his first Science Fiction novel, Across The Galaxy and Back Again. He much preferred writing about the idea sim, than being around the children that bullied him at school. It was a good outlet for him.

Alexander's social standing did not improve. He always remembered the advice that his uncle Michael gave him. Never give those people a second thought, he will have the last laugh. He wrote the much awaited sequel to his debut novel, Right Back Again. He still used the telescope on the roof patio, to gaze at the stars, from time to time.

Seeing everyone mostly happy, (his father at the tip of his career, Cassandra finding love, Michael retired, Bella trying to figure out if she is happy at her job), made Alexander what he wanted to do with his life. He could always write, or become a doctor like his father. But he always did enjoy Michael's stories about the army.

Alexander became a proud uncle of Aria, even though he thought it was improper that his sister had given birth to an illegitimate child.

Alexander enlisted in the military. He believed that he would be the greatest sim of all time, being the first Goth ever to go into space. On his way home, he bumped into Megan Moocher. She claimed to be head over heals in love with him. Alexander thought this to be strange, but he never was good at socialising. They started dating, rushing into a relationship.

They got married, but the marriage didn't last much longer than the wedding. Just after it became official, Adrian ran into the party, claiming that it was Megan who had played a part in the scam that had caused the Bachelors to move in with the Goths. She only married Alexander for the money. Alexander asked if this was true. Megan confessed. Mortimer left the party with Megan, and when he returned he announced that she had agreed to a divorce.

Alexander found it hard trusting, until he met a girl at work the following day, Jenna Styles. He felt a connection with her, that he never had with Megan. After work, he asked her out on a date, she agreed.

His parents gave him some money to do with as he saw fit, he decided to invest a local business, to keep them running.

Alexander and Jenna went on a few dates, they fell deeply in love. He explained to her that he loved her, but after his failed marriage, he was not ready to settle down again. To show her that he was serious about their relationship, and that marriage was not entirely off the cards, he asked her to move in and proposed to her. Jenna accepted both. Being engaged felt right to him. At least this time, he knew that he loved Jenna and she felt the same.

After Michael's passing, Alexander was touched by his uncle's devotion. Seeing that Michael always loved Lolita, too afraid to ask her to be with him, made Alexander realise that he didn't want to be like that himself. He arranged the wedding to be on the beach, and invited all of his work colleagues. The party was wonderful, and everyone had a good time.

A few days after the wedding, Jenna announced that she was pregnant. Alexander was thrilled. He took a few days off work to take care of her, making sure she had everything. As soon as she went into labour, he rushed her to the hospital. His son was placed in his arms, Alexander named him Edgar.

Alexander loved holding his son and playing with him. All memory of Megan Moocher was long forgotten, now that he had a real chance at a happy ever after.

He enjoyed teaching his son, and playing with the toys with him. Alexander loved being a parent. Edgar was more than his son, he was the friend that Alexander had waited his whole life for.

Alexander held Edgar, while they watched Aria playing the guitar. He sobbed, watching his mother pass away.

Alexander took it upon himself to cheer up his depressed father, to no success. He set up a few plant pots in the greenhouse, and encouraged his father to plant seeds in them. As good an idea it was, it did not help Mortimer to let his pain go.

Alexander felt both a happiness and a sadness in his life. Happiness because his son was growing into a fine respectable sim, but sadness because his father had lost the will to live. As much as he was disgusted with himself for thinking it, Alexander was still happy when his father passed. In death his father could be with Bella again.

One night, Edgar took him to one side and announced he had magical powers. Alexander didn't know what to think. Of course he accepted his son, and brought him a good broomstick and a wand, but he still advised Edgar not to tell anyone, in case people shunned him for it.

Alexander spent so much time working, that he did not notice his wife's pregnancy. He was only aware of it, after Georgina was born. He respected the decision Jenna made, to give the baby to Cassandra and Adrian. He was too old and busy with work, to go through taking care of a baby again.

When Adrian died, Alexander did not feel sad about it at all. He did not get on with Adrian all that much, and only tollerated him for Cassandra's sake.

Alexander earned the promotion that he craved. A part of him felt guilty about giving away his daughter. During his many days off, he spent time playing with Georgina. He played his part of uncle well.

The house was really filling up with the birth of Helena. Alexander was not surprised that Aria would be an unmarried mother, since Cassandra had already made that choice.

Alexander was just as shocked as the rest of the family, when Edgar brought home a wife. He did not care for Maria. Alexander thought her a gold digger, just like Megan who had used him when he was young like Edgar.

Cassandra's passing devastated him. The last of his family was gone, all that was left was the younger generations. He feared that they would not uphold the values the family practiced.

Alexander was proud and saddened to see his grandson. Happy because he was starting to think that he was never going to have grandchildren, but sad that there was no chance of Edgar divorcing Maria now.

To treat his wife, he took Jenna out on a date. They went to the theatre, the bistro, then returned home to cuddle up on the sofa. She left him alone for a few moments, and never returned. Alexander was depressed, like any other man would be, when losing the love of his life. He knew that he would see her again.

After the loss of his wife, Alexander decided to retire. He had lived a great life, and wanted to relax and enjoy the comfort of home.

He was happy at the birth of his second grandchild, Xavier.

There is an air of suspicion over his death. Alexander called Aria to his room. He explained that Maria clearly wanted the family's wealth for her own. Alexander told her, that should he die, Aria would be the head of the family. She was not to tell anyone about this, until after his passing. His reasons were, that Edgar would be happy, if his wife was forever bared from the power she sought.

His health had deteriorated a little, and Maria had chosen to take care for him. At first he was not happy with this arrangement. Once he got to know her a little, he started to like her. He asked her to fetch something from the store. Alexander passed away, and welcomed death. He could finally go to a place where his parents, sister and wife was. Happily watching over his descendants for generations to come. 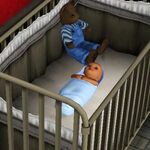 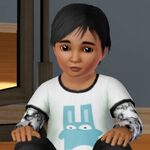 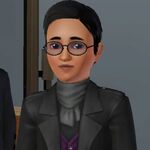 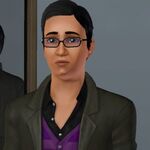 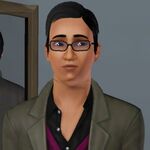 Retrieved from "https://sims.fandom.com/wiki/Fanon:Alexander_Goth_(WayfinderOwl)?oldid=846220"
Community content is available under CC-BY-SA unless otherwise noted.