The Sims Wiki
Register
Don't have an account?
Sign In
Advertisement
in: Fanon created and owned by DeSims, Evolving fanon, Sims (fanon),
and 20 more

Alexander Curious (née Goth) is the illegitimate child of Nervous Subject and Bella Goth. He is known for dating two Sims of the Curious family in two different generations. He married Yah Curious and they got a son named Max together.

Bella Goth was found in the desert close to the Beaker family. She seemed confused and had lost her memory, the only thing she knew was her name. Loki and Circe found her and they thought that Bella was an interesting phenomenon. They asked her to move in and she agreed, not knowing the horrible experiments she would undergo.

There she met Nervous Subject, who lived with the Beakers for the same reason as Bella. He felt compassion for her, and tried to help her getting her memory back. Nervous was in a relationship -and later engaged- with Pascal, however he was scared of Pascal's child and that's why they never married. Also, he didn't think it was safe to leave Bella alone with Loki and Circe. Nervous' and Bella's friendship grew and Nervous got confused, it seemed like he was falling in love with Bella, even though he knew for sure he was a homosexual and even more important; totally in love with Pascal. When Nervous was close to his elderhood he had a weak moment and did WooHoo with Bella, resulting in a pregnancy and the birth of Alexander.

Bella always loved the name Alexander (well, as far as she could remember), so it was no surprise that when the baby was born his name would be Alexander. She wasn't sure how to feel about Nervous. She liked him, but she didn't understand the whole love thing.

When Alexander was a toddler his father taught him the walk and talk toddler skill and Bella taught him how to use the potty. When Loki and Circe also wanted to experiment on Alexander Bella got afraid and moved out of the house without Nervous. She knew this would hurt him, because he loved Alexander like no other father could, but it would have been too dangerous to warn him.

Alexander and his mother moved to different houses, they were all rather small as Bella didn't make so much money. Strangely enough they never moved outside Strangetown, maybe because Bella was afraid of discovering the unknown. He Always felt like his childhood lasted much longer than those of others.

Choosing the fortune aspiration was more a goal than a want. He really wanted to give his children and mother a better future than he had. In high school he meets Kade Curious and they fall in love, his whole world changes when he discovers that he is homosexual, but he couldn't be happier. They go steady his whole teenhood.

Together with his boyfriend Kade he leaves for college. They decide to go live in a dorm and Alexander chooses the mathematics major. Just here he discovers that Kade is Pascal's grandson and he is sure that this is faith, Kade and himself are meant for each other.

This horribly changes when they meet Malta Landgraab, an alien girl from another town. Even though Malta is nothing but friendly to both boys, Alexander is worried and in particular jealous. Kade doesn't notice this and likes Malta, as she is the first alien outside the family he meets. In a huge fight (mainly Alexander screaming) Alexander leaves campus and Kade is puzzled.

Back home, ironically enough Bella had bought the house the Beakers lived in when she heard that both Loki and Circe had passed away. Where Nervous was, was not clear. Alexander was sure that in a few days Kade would come to visit him and everything would turn out alright, however Kade never came. The first contact Kade made with Alexander was when he graduated college and invited Alexander to his wedding with Malta. Alexander's fear had come true, but it turned out to be his own fault. Alexander didn't go to their wedding, he didn't visit them when they got twins and always kept conversations short when they bumped into each other on the street or whenever Kade called him on the phone.

When he met Yah Curious his whole world changed. He didn't know at first, but Yah was actually Kade's son. He knew the age gap was huge, but he was truly in love with Yah. Kade's response on this was oddly positive, and he wished the two all the best.

He and Yah got engaged just after Alexander turned an elder and they married shortly after. Yah turned out to be pregnant and Alexander was shocked. When Yah and Kade both told them that this was something that happened more often in their family he was comforted. Their son Max was born a few days later.

Alexander was extremely happy with the birth of his son, but he knew that he wouldn't be around long enough to see Max's children. Because of his age it wasn't so easy to teach Max how to walk, as he couldn't bend his back for such a long time without feeling an enormous pain. In the end Alexander potty trained him, as Yah noticed that this would give him the least problems to deal with. Even though he lived in a big household Alexander was often alone, as he didn't have a job and was too old to even start one. 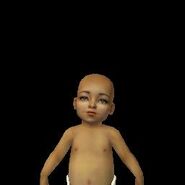 Alexander as a baby. 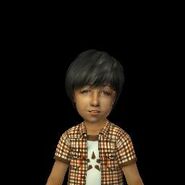 Alexander as a toddler. 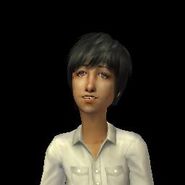 Alexander as a child. 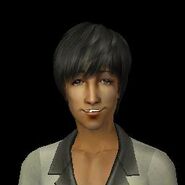 Alexander as an (young) adult. 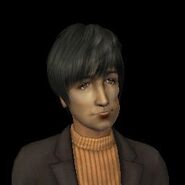 Alexander as an elder.
Community content is available under CC-BY-SA unless otherwise noted.