Alex Curtiz is a Sim featured as a main supporting character in A Sim's Tale series. He is son of Dieter and Ana Curtiz, husband of Jean Curtiz, and father of Daniel Curtiz.

Alex first introduced in Book 1 as a supporting character and again in Book 2 with a more prominent role. Alex also featured briefly for few chapters in Book 3 where he returned to Sunset Valley and had reunion with Jean and in Book 4.

Sometime after the Redfields arrived in their new house, Alex, 9 years old, passed by their house and met Jean Redfield in an awkward moment, triggering a feeling toward his new neighbor. Alex then found that Jean was in same class with him. However, too bad for Alex, Jean saw him as clumsy. During the Goth's party, Alex's family was also there. Two months later, Alex invited Jean to watch a Sci-Fi movie--even though he annoyed her at the first. In the theater, Alex revealed that he liked Sci-Fi film so much, which surprisingly similar to Jean. Later, Alex tried his luck to got a telescope for Jean by participated in a game. Unfortunately, he failed, but Jean cheered him. After this moment, Jean started to had feeling toward him and their relationship became close. Later, after Mortimer's beg for forgiveness, Alex commented that they would never have seen him the way they did if he had told them his true feelings. Later, Alex won a telescope and present it to Jean like he promised. Following the arrest of Nancy Landgraab, Malcolm was absent from the school for weeks. Alex, Mortimer and Miraj made a visit, but Malcolm didn't want to see anyone. After Jean's suggestion, he and the others to visit him once again together.

Seven years later, in 2020, Alex was 16 years old, his feeling toward Jean became stronger. He was saddened when Jean went to France for a month. After Jean's return, Alex confessed his feeling, but his confession rejected by Jean who reveal that she already had relationship with someone else. Coincidencetally, Alex also told by his mother that they family would move to Roaring Heights, so Alex didn't mind with Jean's decision, even though his feeling toward her didn't changed. In one day, Alex learned that Chris and Tamera would went to the old mine to find a Rainbow Gem. Knowing how dangerous the place was, Alex decided to accompany the two and help them finding the gem. During their search, the three encountered a mysterious man who lived inside the mine. Big Steve chalenged them to play Poker if they really want to get the gem. Alex accepted the chalenge, and won after tricking Big Steve to gave up, made the homeless man believed that Alex had stonger cards, even though it revealed that Alex had no chance for winning with his cards. During the prom, Jean finally revealed her true feelings on him. Alex also stated that his feeling on Jean would never changed before they kissed. In a next day, Alex and his family finally moved out from Sunset Valley to Roaring Heights. Before left, Alex shared one final moment with Jean.

Just not too long after moving, Alex, who always wanted to join the military career in the future, asked his parents to enrolled him in the military school. During his years at the military school, Alex was unable to made contact with Jean due to the school's strict rules. After graduated, an incident happened in the Curtiz house. A burglar robbed their house. Alex's cellphone was among the stolen goods. After this incident, Alex was unable to contact Jean and his other friends in Sunset Valley since their addresses and numbers were stored in his stolen phone. Alex was enrolled in an unknown university, taking technology major. But, he claimed that he was uncomfortable with his campus.

Four years later, Alex, who was 20 years old, made a visit to Sim University. He stated that he glad he would finally moved there in the next semester. Unknown to him, Jean also enrolled there. Alex took Technology major. During the semester break, he decided to made visit to Sunset Valley to "settle thing" with Jean. After explaining about what happened, Alex and Jean eventually reconciled and officially became a couple. Ten years later, Alex, now 30 years old, already became a soldier. He and Jean were married and the two had a son named Daniel. Alex also moved back to Sunset Valley and worked in military career.

In 2048, Alex's father-in-law, John died by old age. Alex and his family attended John's funeral. Alex claimed that he would never forget how kind John when he was alive.

Eight years after John's death, Alex now 52 years old and still served for military, no as squadron leader. However, Alex wished he could retired sooner due to his age. One day, Alex was informed by Jean about Daniel. Alex learned the truth that Daniel was gay, explaining his recent attitude. 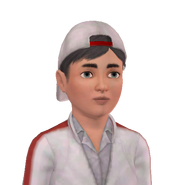 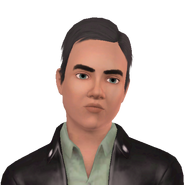 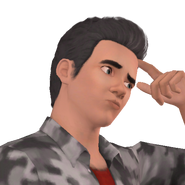 Age 20
Add an image to this gallery

Add an image to this gallery
Retrieved from "https://sims.fandom.com/wiki/Fanon:Alex_Curtiz?oldid=770906"
Community content is available under CC-BY-SA unless otherwise noted.