Fanon article ownership
This fanon page was created and is owned by Mathetesalexandrou (talk). Unless the edit is constructive and/or minor (such as fixing a template), please do not edit this page unless given permission from the author.

Akio Isador is a male sim of Time Paradox, and an accomplice of the aspiring Isis Stone. He is a psyker, which plays an important role in the probable confrontation between Kallisto (and the Big 6) and Isis, latter seeing the former as her archrival. Despite his affiliation with Isis, Akio is hardly like Isis: he has a good sense of humor, and is quite likable. In fact, he is quite popular with the children, although babies fear that he might take candy away from them.

The Merger and before[edit | edit source]

Akio was originally a baker, although his true wish was to be a performing magician. However, Akio could not compete when a bigger industrial competitor set up shop, driving Akio out with the sheer power of quantity (and low prices), despite the fact that Akio's bread generally tasted better. Having lost the bakery, Akio was subjected to a rough life, employers not really interested in Akio. As such, he ended up becoming a petty peddler, until he was introduced to the black market. Akio took up the esoteric product of the plasma fruit, which was conveniently in very high demand in Bridgeport. It was there Akio met with Isis, who later took him in offering a merger. To Akio, this meant stability for a time being, and Akio eagerly accepted, gladly relinquishing his (however meager) share of the market to Isis.

Having merged, Akio was to live with Isis, who herself was a newcomer to Starlight Shores. Having been relieved of his duty as a vendor, Akio decided to get a job as a magician as he always wanted (using the stage name "Baker Librarian"). Isis was happy to see that, because it meant extra income for her coffers. By the time Akio settled in, Isis and Akio generated a decent income, enough to generate a high surplus (when compared to living expenses) although not yet nearly enough to start thinking about obtaining domains. Isis was also quite an experienced tinker, and as such Isis wished to invest in a workbench to further supplement the income. While Isis worried about investing and expanding their rather small income, Akio was very content with his job: although it wasn't high paying as of the moment, Akio clearly enjoyed performing in front of people. While doing that, Akio excited the children, and soon became a local popularity figure among the children.

Before, Akio was seen as a simple supplementary source of income. However, when Isis discovered Akio's psyker abilities, Akio was turned into a full-scale accomplice. Akio was always rather mischievous: although he loved children, he also loved a little chaos from time to time. Akio was already having a blast looking with Isis the political havoc caused by the conflict between Kallisto's Papal forces and the forces behind the celebrities of the Council of Bridgeport. Although Isis herself was quite knowledgeable in outside dealings of the Ecclesiarchy, Isis had 0 idea of ongoing projects and the workings of the church, simply because Kallisto had the upper hand when it came to electronic encoding. However, Kallisto also had employed telepathic messages when speed was needed, and such messages needed far less encryption. Taking advantage of that, Isis wanted to know of Akio could tune into the Ecclesiarchal telepathic network. It was rather easy to find the network, since Ecclesiarchy had by then dominated organized psychic signal realm. However, Akio wasn't exactly a high ranked psyker: he was of far lower rating than Kallisto, and also was less of a psyker than Antigone. Here, Isis saw even more reasons to invest in the workbench: Isis could help Akio tune into the telepathic messages, which would grant them a significant advantage in intelligence.

Into the Fray[edit | edit source]

However, things started to grow more perilous after Kallisto took off from her internal management back into the conquest mode of thinking, as Hekatonschoinos grew closer to completion. With Moonlight Fall taking some hits, his partner Isis forged a deal with Moonlight Fall's leader, Ezekiel Gretchyn. However, Ezekiel's deal also had aspects of deals and terms posed by that of the Council of Bridgeport, which was also in a state of dilly-dallying given Kallisto's long hiatus. With this business deal, Akio was to stay alongside the Council at Antigone's house as to serve as the intelligence officer given Akio's work involving decrypting some of Ecclesiarchal telepathy. 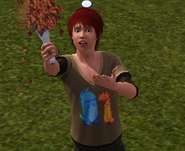 Akio gets a small crowd in his small performance.

Akio's first stage performance
Add an image to this gallery

Retrieved from "https://sims.fandom.com/wiki/Fanon:Akio_Isador?oldid=685180"
Community content is available under CC-BY-SA unless otherwise noted.