Ajay Loner is a well known resident in my player stories in The Sims 2 in Strangetown. He is the son of the late Vikram and Madhuri Loner, the husband of Kristen Loste, and the father of Alicia Loste. Ajay is voiced by Stephen Kearin and is 23 days from being an elder.

When Ajay first moved into Strangetown he was welcomed to the neighbourhood by Holly Andersen, Jessica Ebadi and Nervous Subject. He met Trista Shaw soon afterwards.

Early in the game, Ajay hired a maid to clean up around the house. The maid turned out to be Genesis Lam. Ajay has made friends with Pascal Curious and Nervous Subject. He initially thought that Nervous was a bit of a joke, but Pascal easily persuaded Ajay to take Nervous seriously.

He felt rather uncomfortable when first meeting Pollination Technician Nine Smith but he was able to pretend that he wasn't nervous. Ajay had heard many rumours about Aliens being dangerous. But after meeting PT9, Ajay was convinced that these rumours were false.

Ajay had been trying to track down Bella Goth so that he could answer the question as to whether the sightings of Bella Goth in Strangetown were a fact or fiction. His question was soon answered - the two Bella Goths were actually different.

In my player stories Ajay Loner was kidnapped by a Mannequin named Galaxy Nine Asteroid along with townies Blair Mace and Samuel Riley for a surgeon experiment. After Ajay had been given cosmetic surgery and undergone amnesia, G9 seemed to have a change of heart because he then decided to do anything to help his three victims clean up the mess that he'd made to their lives (being fickle as G9 is).

Ajay started off with a customised variation of the "archheart" template. Now he uses a different variation of the face template "archheart" in Create a Sim. The only differences from the original "archheart" template are that the corners of the mouth are tilted upwards (via 2 clicks). He also now has grey eyes and tweezed eyebrows like Galaxy Nine. This happens with all of G9's victims. However Ajay is the only Sim that G9 has performed surgery on.

Galaxy Nine Asteroid seems to have succeeded in reviving Ajay's memories, except that Ajay still doesn't remember who his relatives were. He now has a different hairstyle that came with the Nightlife expansion pack - known as a choppy peak.

Ajay has made friends with Galaxy Nine and has rekindled his friendships with Pascal and Nervous. He is employed in the Medical career, starting off as a Nurse. Ajay is now married to his former workmate Kristen Loste who is now employed in the Athletic career. The couple had a child named Alicia Loste. 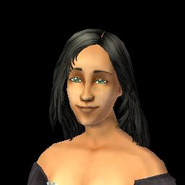 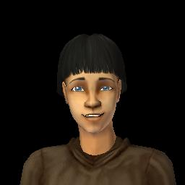 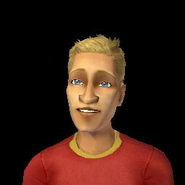 Ajay's fellow victim Samuel
Add an image to this gallery

Retrieved from "https://sims.fandom.com/wiki/Fanon:Ajay_Loner_(C.Syde)?oldid=907155"
Community content is available under CC-BY-SA unless otherwise noted.