Adrian is the husband of Cassandra Goth, father of Aria Goth, uncle of Edgar Goth and Georgina Goth, grandfather of Helena Goth, great-uncle of Dexter Goth.

All that is known about him, is there is no record of his parents in the last few generations in city hall. As if they were around long before the record was kept, or they mysteriously disappeared. Adrian's past differs from each retelling, as if he has something to hide. All they know, is that before he leaves the house in the morning, he applies some kind of elixier, and only on school or work days.

Adrian came to Sunset Valley, and got a job in the Law Enforcement career. He proved to be the best cop the force had ever had. Faster than criminals, and stronger. Always able to detect a lie in every interegation. Over time he grew to love Sunset Valley, and never wanted to leave. He stumbled upon a case, where criminals were posing as repo men, to take people's homes and possessions from them, and selling them for a profit. Under his determination, and tricking answers out of a few people with hypnosis, he uncovered the whole scheme, and returned to the homes to the unfortunate sims, except for the Bachelor family who were happy with their new home.

Adrian reached the top of his career becoming an international super spy. He raided the criminal hideout on his first day on the job, getting great fame from it.

When Jenna gave birth to Georgina, and handed the baby over to himself and Cassandra. Having a baby to take care of gave him a new lease of life. He did long for grandchildren, but Aria seemed adamant on not having children. He no longer feared the grave. He wanted to enjoy his life to the fullest.

He noticed Aria's pregnancy, but did not want to mention it, in case he was wrong. Adrian was both happy and sad to meet his granddaughter Helena. Just as she was coming into the world, he would soon be leaving it.

Adrian had gone out to the garden to get some fresh air, when Death came for him. He had lived a good life full of ups and downs. Met many great sims, and raised a family of his own. Adrian shook Grim by the hand, and happily went to the netherworld in peace. 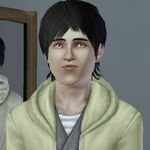 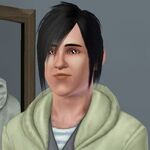 Retrieved from "https://sims.fandom.com/wiki/Fanon:Adrian_Gardener?oldid=644474"
Community content is available under CC-BY-SA unless otherwise noted.