Fanon article ownership
This fanon page was created and is owned by ThomasWikia (talk). Unless the edit is constructive and/or minor (such as fixing a template), please do not edit this page unless given permission from the author.

Evolve
This fanon page or story is still being developed and will change over time.
Template:Review fanon

Adeline Aquino-Begino is a young adult Sim who currently is a maid in the Haitche household. This Sim is a fanon made by ThomasWikia.

Adeline was born in a village located at Far East of SimNation. As her family is poor, she had hard times living in the village. When she was a toddler, 10 days before being a Child, her father, Gerald, died of drowning when he was struck on a tsunami located on a public beach. Because of the massive tsunami, her whole village was destroyed.

Luckily, her family was given a new house and her mother, Susan, got a new job, with the amount of §50,000. Being a child, she was sent for education in a public elementary school. She had a wonderful time at school, hanging out with her friends, learning new stuff and having fun during Physical Education. Her younger brother, Aaron, was adopted by her mother.

During Adeline's teenager life, she was one of the best students in her public high-school. But as days had gone by, her mother lost a lot of cash over debts she had made and she had lost her job. The family was forced to move to a lower-class house. It was a bad move.

Because of this, she ignored her mother and one day, she decided to run way and stay with her best friend. During her stay, she was like a normal teen. But a few days later, the police arrived and sent her back home. Her mother was happy that she was back, unlike her.

When Adeline became a young adult, she got a job as a full-time maid and she was sent to Appaloosa Plains to do the job. She was assigned to the Haitche household. When she first arrived to their house, she was shy, but the household cheered her up to make her happy and enjoyable for her to continue her work there.

"The family needs a maid because we (the parents) have a hard time taking care of their children when they are working," Emmy Haitche stated. "Maids are popular for helping the households."

Adeline quickly gain relationship with her, her husband and children. But after Emmy's husband, Albert Haitche, died of drowning in their swimming pool, she remembered of her father's passing. She mourned his death, even though they did not do much together. The household also had an female adult cat named Twilight Haitche but it was taken away by a social worker due to the household was not taking care of it. She felt sad, as she never played with a cat before, thus on tears again.

She is currently hanging out with a Sim, Booker Singleton, a young adult male who works in Politics as a Campaign Intern. She tried flirting with him but it did not work.

A new male adult joined the Haitche household since he could not find a house. He is Chung Xiao Li (due to the game, he is named Xiao Li Chung, Xiao Li as first name and Chung as last name). Adeline tries to get together with him. It is successful. They moved out to a newly-built house to start a new life with themselves. 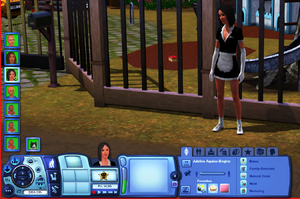 Adeline, in her maid outfit 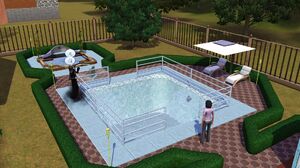 Adeline, in her sleepwear, witnessing the death of Albert Haitche.
Add an image to this gallery
Retrieved from "https://sims.fandom.com/wiki/Fanon:Adeline_Aquino-Begino?oldid=624744"
Community content is available under CC-BY-SA unless otherwise noted.