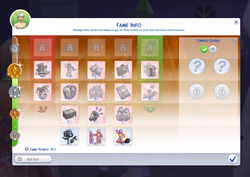 Fame perks and fame quirks are a gameplay feature for celebrity Sims in The Sims 4: Get Famous, similar to the vampire perk system in The Sims 4: Vampires.

Perks and quirks can be cleared (along with fame levels) by ordering a Celebrity Cleanse on a celebrity's phone. Buying a Quirk-B-Gone potion from the aspiration rewards store and drinking it will remove one quirk.

Some perks are restricted to specific good or bad reputation levels.

Celebrities can have up to four fame quirks, but only one slot is unlocked at one star. Another quirk slot is unlocked at three stars, and the remaining two are unlocked at five stars. Sims have a chance of receiving quirks from doing relevant actions frequently, such as eating perfect-quality food or interacting with fans. All possible quirks are listed in the table below[1][2].

Retrieved from "https://sims.fandom.com/wiki/Fame_perk?oldid=846901"
Community content is available under CC-BY-SA unless otherwise noted.