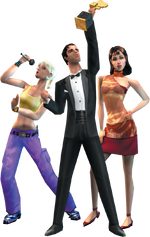 The Fame career track is featured in The Sims: Superstar. Sims can enter this career by signing up to the SimCity Talent Agency through the Studio Town tabloid, which Nancy the Paper Girl delivers each day. Unlike other careers in The Sims, the Fame career is tracked by a series of 5 stars known as Star Power, which represents an individual Sim's level of fame. Star Power will increase or decrease in half-star increments based on performances and behaviour in Studio Town. It's not possible to be fired from the talent agency, but they will decrease a Sim's ranking if they do not work in Studio Town regularly, give poor performances, or suffer from a nervous breakdown.

The Fame career has no set hours of work; earning money and increasing fame requires the Sim to travel to Studio Town, and perform successfully when using fame-related objects. The usual metrics of mood and skills are also required, but the number of friends a Sim has is irrelevant; only the total star power of their personal friends is counted, e.g. having two five-star friends is equivalent to having five friends with two stars each. However, it's difficult for a Sim to make friends with celebrities who don't have similar levels of star power. Increasing star power is not guaranteed, even if the Sim has enough famous friends and is in a good mood. At low levels, a Sim simply needs to interact with the stage or set in order to receive payment and increased fame. Higher-level sets require performances to be conducted in a specific order, and payment is based on success at this. Prior to the performance, the director will describe to the Sim how they want the scene, song, photo shoot or fashion show to be performed, and a choice of three different actions will be presented. The Sim must please the director by performing actions in the correct order, to which they will react positively. If the wrong choice is selected, the director will react negatively, and offer multiple chances to make the correct selection.

If Makin' Magic is installed, magical Sims can cast the Price of Fame charm to instantly become a 4.5 star celebrity. However, the charm will backfire if they already have a 3 star ranking when cast.

Studio Town is broken up into several distinct areas, based around three disciplines; Acting, Modelling and Singing. The lots focused around Acting can be identified by their golden rooftops and beige stucco exteriors; KWLW Studios, Fairchild Film Studios and Meeker Studios. Two lots are designed for Modelling, and have blue roofs and white stone exteriors; Buckingham Galleries and The Gast District. The three lots with black roofs and black brick exteriors are based around Singing; Cameron's Lounge, Midlock Multiplex, and Music for the Eyes Inc. Finally, Studio Town Center is the central hub of the town, and is more oriented towards non-famous Sims.

Chance cards have a random chance of occurring when returning home from Studio Town, provided the Sim is at the required level.

Retrieved from "https://sims.fandom.com/wiki/Fame_(career)?oldid=844201"
Community content is available under CC-BY-SA unless otherwise noted.