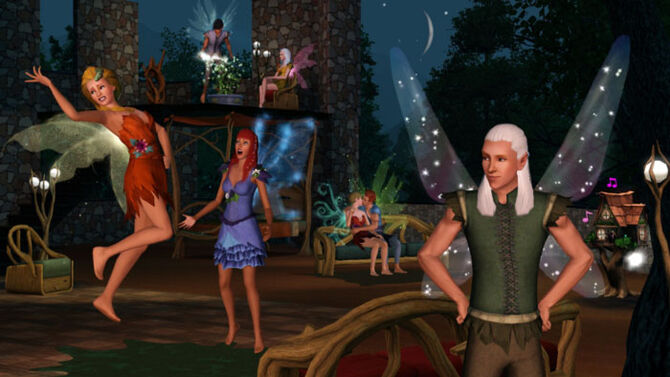 Fairy
A life state · Featured in: 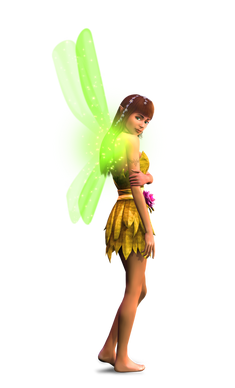 A fairy seen in the Sims 3: Supernatural trailer

Fairies are a playable life state that were introduced in The Sims 3: Supernatural. They first appeared in the official announcement trailer for the expansion.[1] Before that, there was a patch (1.32), which accidentally leaked visual effects files of fairy wings.[2]

Faerie Queen Mara, an NPC vendor from The Sims: Makin' Magic, and the Summerdream family from The Sims 2, could be considered fairies as they feature physical traits such as pointy ears and - in the case of Mara - wings. However, since the life state was not introduced yet, these are purely aesthetic, and at most, play a role in storytelling.

Fairies are described as elegant but mischievous magical creatures who love playing tricks on Sims, and who maintain their basic needs just like normal Sims. They have a hidden skill known as Fairy Magic. Fairies tend to take a liking to animals and gardening.

Players can create a fairy in Create a Sim. At the "Supernatural Types" button at the Basics section of CAS, select "Fairy" and the Sim being created becomes a fairy. After that, the fairy automatically gets a pair of wings - for flight in their normal and natural form - with a unique color. The wings' color is the same in the fairy's natural form.

In the Basics section, there is a second tab which is labeled as Fairy Basics. It allows the player to customize a fairy's wings and select their color.

There are six different wing designs and they are all labeled. They are:

To change the color of the wings, there is a Change Wing Color button on the bottom right outside the box of wing designs. There are two tabs which are the Swatches and the Color Wheel. Choose any color for her/his wings. However, in custom fairy wing colors cannot be saved, so it is the player who will need to remember the color code or save a fairy with similar wing colors into the bin.

There are many fairy-themed clothes and accessories for a fairy to wear, although other Sims can wear them too. However, letting fairies wear them gives them a more cohesive look.

Fairies live longer than normal Sims just like werewolves and vampires. Like vampires, young adult and adult fairies have a lifespan that is five times as long as that of a normal Sim, whereas young adult and adult werewolves have a lifetime that is 1.5 times as long. They move at an increased rate as they fly around. They shrink to their natural form to perform interactions that they can't do when normal-sized. They are "natural born tricksters", tricking Sims using different interactions.

Fairies are very good gardeners. They have benefits in Gardening. They can also build their Charisma skill at a faster rate.

The more they use magic, the more abilities become available. They can receive different auras, and the ability to use fairy pranks.

Fairies, like witches, have a magic meter that depletes every time they use their abilities. It can be found under their headshot when they're selected in the Sim's skewer. It informs the player how much remaining magic power their fairy has.

As their magic powers drain, fairies should maintain the magic meter in order to continuously use their abilities. They can slowly wait for a while to refill the meter or they can fill their meter at a faster rate by drinking Pollen Punch, riding the train in a train set or relaxing in a Fairy House. They can also instantly replenish their meter to full by drinking the Essence of Magic elixir. If all of their magic power is used up, it will take normally six hours to refill completely, enabling them to use magic again. During these six hours, they will have a negative moodlet.

When starting out, they will have a very limited set of magical abilities. As they gain their Fairy Magic skill, they unlock new abilities and benefits slowly. Although fairies are "natural born tricksters", not every trick will be successful. Sometimes, their tricks will fail, causing some negative effect to either the fairy, the affected Sims, or both.

Fairies use auras which affect themselves and nearby Sims. There are several different auras, which have different effects. These are:

If Seasons is also installed, fairies can cast Reviving Sprinkle using the Weather Stone, which turns rain into flowers. All the gardens in the current world will be magically watered and fertilized, vanishing weeds off and revived dead plants. At the end of Reviving Sprinkle, a beautiful rainbow can be seen across the sky.

Since fairies love to trick, they can do so with the available interactions, depending on what Fairy Magic level they are on. This may reduce Sims' relationship with the fairy.

But fairies can also be on the good side. In addition to their auras, they can use the Playful Pester interaction, in which a fairy playfully circles the head of a Sim in their natural form. This boosts social and fun motives for both the Fairy and Sim.

Fairies can give their fairy dust to Sims which can be used to remove the zombie's curse or give another Sim the ability to float.

Fairies also have their very own social interactions, being able to "Tell A Fairy Tale", "Talk About Flowers" and "Brag About Playing Pranks" to other Sims.

Fairies can also play round by the Fairy Frolic interaction. Similar to the Playful Pester interaction, it is performed by two fairies when they turn into their natural forms and play around.

Baby fairies do not have wings, although the color of their wings can be determined via the color of the sparkles that surround them. Toddler fairies will have wings, but they have no special fairy abilities, aside from the fairy hover. They also have fairy-styled idle animations, such as floating and flapping of wings. They are also easy to take care of with a fairy bungalow or castle. They can drink pollen punch to satisfy their hunger, and can join or host a fairy house party. Fairies may also sleep in a bungalow or castle.

Teen fairies are almost as developed as adult fairies and can perform an impressive range of tricks.

A fairy Sim can be returned to be normal by using the Potent Cure Elixir.

The fairy can also be asked by her/his romantic interest to Forsake The Fae. The opportunity window will appear, explaining what may happen and what to do. Once accepted, they must follow the instructions - fairies usually go to the Arboretum - to forsake the fae, thus becoming normal.

Fairies that have become normal again no longer have any fairy abilities or wings.

Mara, the first fairy of the Sims series.

A Male Fairy and a Blue Female Fairy in the Background 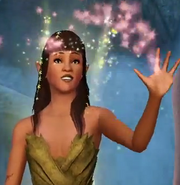 A Fairy repairing a toilet.

A Fairy curing the zombification

A Fairy playing a trick

A Fairy in her natural form

A Fairy's aura of Creativity 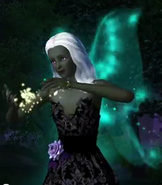 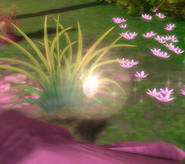 A miniature fairy in The Sims 4.
Add an image to this gallery

Retrieved from "https://sims.fandom.com/wiki/Fairy?oldid=940227"
Community content is available under CC-BY-SA unless otherwise noted.