Faerie Queen Mara is a fairy vendor NPC who appears in Magic Town. By default, she appears on Forest Edge Camp and Serra Glen. She is considered to be the first Fairy in the Sims series even though fairies were not made playable until The Sims 3: Supernatural.

Mara is the hardest to beat at toadstool races as she will teleport during the race instead of walking or running; the only way to defeat her is to obtain the same ability or have additional family members to assist. However, she is very easy to beat at dueling and, as a result, the player will receive a very small amount of MagiCoins for beating her (4 if the player beats her winning the four rounds or 3 if he wins three rounds and loses one). She will most often give Pegasus Feathers as a quest reward. 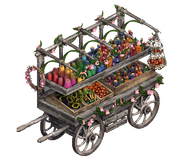 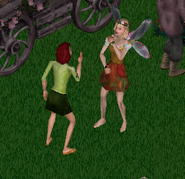 Add an image to this gallery
Retrieved from "https://sims.fandom.com/wiki/Faerie_Queen_Mara?oldid=820125"
Community content is available under CC-BY-SA unless otherwise noted.