The Sims Wiki
Register
Don't have an account?
Sign In
Advertisement
in: Services, Types of NPCs, Exterminators
English 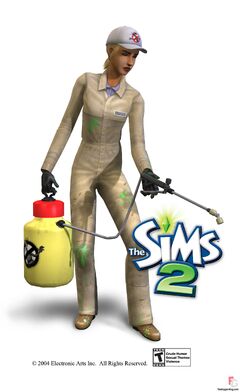 The exterminator is a Service NPC in The Sims 2. If there is garbage on a lot, or the lot has been visited by evil witches[TS2:AL], and cockroaches are crawling around, call the exterminator and they will rid the lot of them.

Cockroaches are included in The Sims: Livin' Large, but an exterminator NPC is not. However, the maid, Servo, and Bonehilda[TS:MM] will get rid of cockroaches as part of their duties.

Sims can be directed to perform the action "Spray," which causes a Sim to use bug spray to kill cockroaches. In The Sims, Sims who try to stomp cockroaches aren't likely to have much luck at getting rid of them.

As in The Sims, Sims in The Sims 2 can use bug spray to kill cockroaches if the player does not wish to call an exterminator. Sims who try to stomp on roaches are likely to get sick.

Sims living in apartments cannot hire exterminators; instead, they may call the landlord to perform this task.

The Exterminator wears a yellow suit with orange details and a hat. They also carry a tub of bug spray on their back which connects to a hose in their hand. If a household has a butler, he will call the exterminator, but he cannot actually spray the cockroaches himself.