The Sims Wiki
Register
Don't have an account?
Sign In
Advertisement
in: Worlds in The Sims 4, Eco Lifestyle, Evergreen Harbor
English 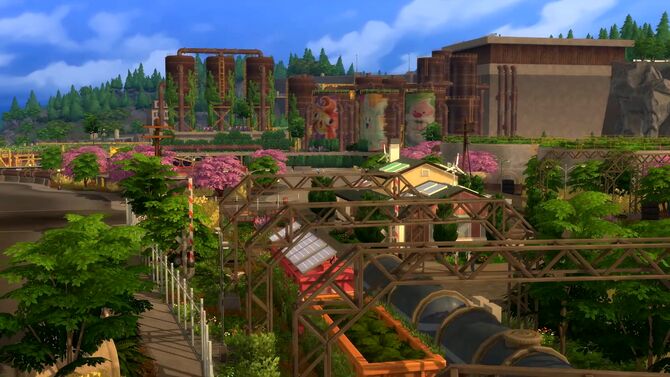 Evergreen Harbor is a world that is introduced in The Sims 4: Eco Lifestyle. It is an industrial harbor town based off the Northeastern United States, particularly former mining towns along the rust belt in states like Ohio and Pennsylvania. Each neighborhood is within a different state of pollution on the eco footprint.

This smoggy old port may make you gag, but it's an adequate place to learn about industrialization

Evergreen Harbor consists of three neighborhoods, each in a different state of pollution on their eco footprint.

§15,000
Knox Greenburg, Mary Greenburg, Blossom Greenburg
Mary and Blossom are a couple of old timers in this town. They're trying to spruce up the space, with Mary focused on her garden and Blossom painting up unused places. Age isn't on their side anymore, however, it's a good thing their adopted son Knox is fighting for the family name to help make the world a little more green. Unfortunately, sometimes he takes "fighting" a little too literally.

§20,000
Cletus Harris, Faye Harris, Jeb Harris, Gideon Harris, Francine Spencer
Cletus and Faye found this heritage home in Grims Quarry for dirt cheap. Nothing seems wrong with it and the Harris' weren't about to question a good deal. Cletus' free-spirited mother soon joined them, completing the big happy family. Mysteriously, their eldest son always wear a shameful bag on his head. Also, it doesn't seem like any of them other than Faye has a job, but the house is well-furnished. What is going on here?

§25,000
Bess Sterling, Jules Rico
Bess and Jules are a power couple with big dreams. Big dreams about sweet sweet money. A civil designer by trade, Bess place herself in the perfect position to convince city officials and residents alike to enact programs that would benefit her bottom line. Her partner-in-crime, Jules, is a Style Influencer that loves fashion as much as he loves convincing people to his rejected styles. Cheerful and charismatic, together they hustle around Evergreen Harbor like an entrepreneurial whirlwind.

§30,000
Yasemin Tinker, Tina Tinker, Olive Tinker
The talented, but perpetually stressed Tina Tinker is a very successful Freelance Crafter. Her equally successful spouse Yasemin managed to convince her to move to Conifer station with their daughter Olive. Tina takes on too much work, and Yasemin just wants her to relax and spend more time with family. Meanwhile curious little Olive loves nothing more than to admire her two mothers' works and dream of following in their footsteps.