Erika Lin is a premade female Sim from Monte Vista. She works as a gene therapist in the medical career track, and has five points in logic, 4 in athleticism, and eight in charisma.

Notably, Erika has no negative traits. Whether or not she is related to Roxie and Shirley Lin of Riverview is unknown, but it is possible, as it is stated that she left her family behind, and she shares a surname and some features with the two. 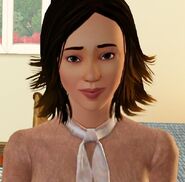 Screenshot without sunglasses
Add an image to this gallery
Retrieved from "https://sims.fandom.com/wiki/Erika_Lin?oldid=901517"
Community content is available under CC-BY-SA unless otherwise noted.